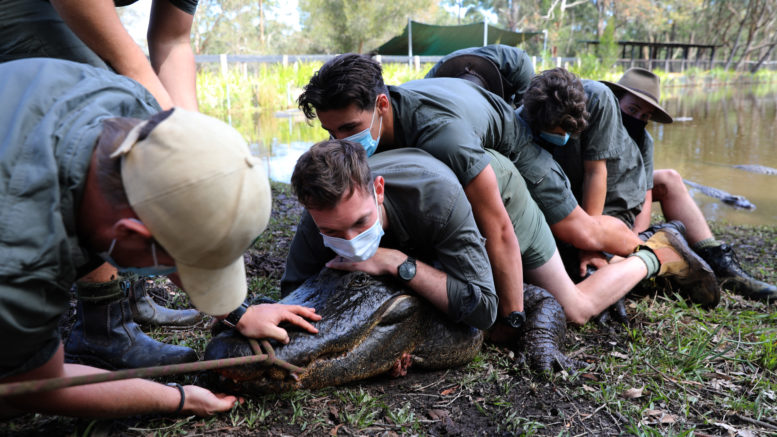 Keepers wrestle with Kanye as he is removed Photo: Australian Reptile Park

You know your behaviour needs attention when you have to be removed from a lagoon of fellow alligators.

Young rogue male alligator Kanye has been taken from the alligator enclosure at the Australian Reptile Park, following hostile behaviour since spring began.

Kanye has been charging keepers and displaying aggressive behaviour towards the other 54 alligators during the mating season, so he’s been isolated for a short while to cool down.

“We even saw this earlier this year when we added the additional 20 males to our lagoon,” he said.

“Kanye has come out of hibernation explosive; therefore, a danger to himself, to the other alligators and staff.

“Kanye has made the other alligators very tense.

“He’s a young bloke, full of testosterone and he’s raising havoc right now, so the best thing to do is to send him to the naughty corner for some quiet time out.

“American alligators have one of the strongest jaw pressures of any animal and one bite can be life-threatening, so our amazing team had to take extreme care during the removal.”

This was easier said than done, with Kanye weighing around 400kg and almost four
metres long.

It took a highly skilled team of over a dozen keepers to locate and catch him from the lagoon.

He was then transported to an isolation area, where he’ll spend a month or so calming down.

It is hoped that Kanye will return to the lagoon once the peak breeding season has ceased, and his hormone levels have returned to normal.

The Australian Reptile Park has the largest population of American alligators living in Australia and visitors can watch them being fed on weekends.

Visitors can redeem their Dine & Discover NSW Vouchers at the Park – both at Reception and the on-site kiosk, the Hard Croc Café.

1 Comment on "Young Kanye sent to the naughty corner"