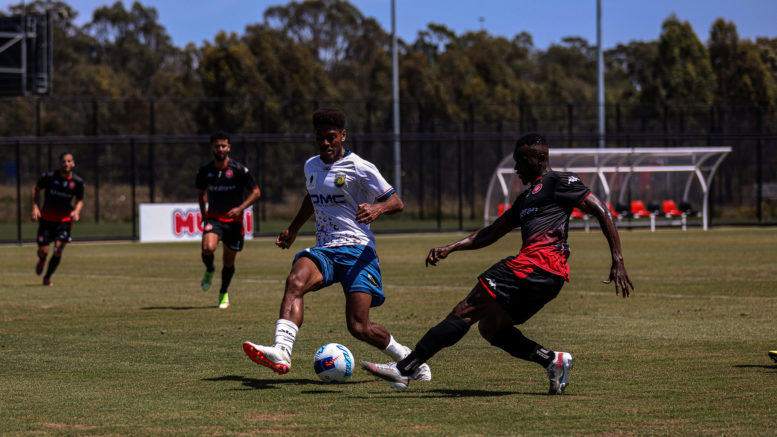 On Saturday, October 23, the Central Coast Mariners played their opening pre-season match against the Western Sydney Wanderers at Wanderers Football Park, falling behind in the heat by 2-0.

It was the first chance for many new faces to get their opening minutes of game time, both for the handful of new signings and academy graduates and the new Head Coach, Nick Montgomery.

“It was a great run out for the boys against a quality A-League opponent in Western Sydney, in what turned into some testing conditions,” Montgomery said.

“We played a lot of young players today including the likes of Jacob Farrell and Harry Steele, both born in 2002 and products of the Central Coast Mariners academy, who have not yet featured in the A-League, plus the new recruits who performed really well against an experienced Wanderers side.

“These minutes will be really valuable for their development.”

Of the six players to have joined the Mariners this year from elsewhere in the world, four were added into the starting XI.

Yaren Sözer was also given his goalkeeping debut and was called upon for top notch saves throughout the game.

The forward pairing of Matt Simon and Marcos Ureña returned with their signature high energy pressure play on the ball and the former of these was able to force a penalty whilst the game was still deadlocked.

Captain Oliver Bozanic took the spot kick which connected with the upright to the relief of Daniel Margush in goal.

The momentum started to shift in the favour of the hosts, who returned from half-time to score their first goal before the hour mark.

The initial block by Sözer was unfortunate to fall well for Thomas Aquilina who converted on the follow up strike.

Young talents, Matt Hatch and Damian Tsekenis were given the chance as late substitutes, but the Wanderers capitalised once more as the late-game and choking heat fatigue set in.

Their second goal came from Daniel Wilmering’s cross into Jordan Swibel who fired the ball past Sözer.

The loss was disappointing, but not one that Montgomery will take to heart as he focuses on the FFA Cup elimination match against Blacktown City FC, on November 13.

“We will use this match as a great learning opportunity as we move through our pre-season preparations and onto our FFA Cup match and with Nicolai [Muller] and Birraz [Mark Birighitti] returning to the squad next week, I am happy with where we are at.”