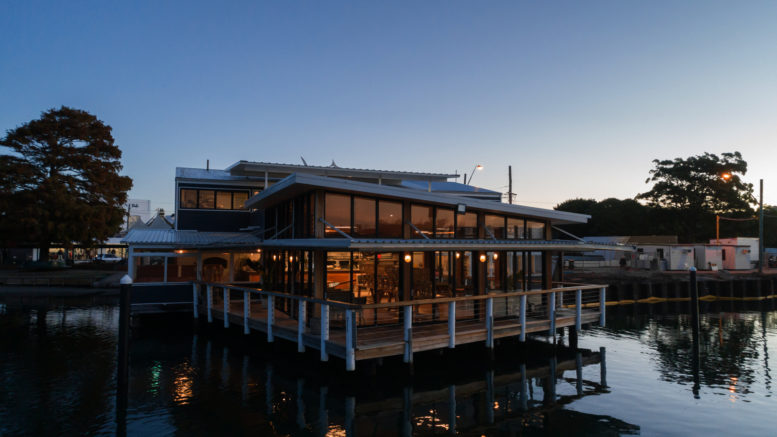 A St Huberts Island resident has received national recognition for her work in designing Woy Woy Fishermen’s Wharf after she was tasked with revitalising the iconic restaurant.

As the principal designer of the project, Louise Williams received an award for Best Commercial Design at the Australian Building Designers Award on Friday, October 22.

Williams, along with her business Law Building Design, worked on the Wharf in 2017 in partnership with building company, Parkwood Pre-Fabricated Homes, and interior decorator, Xanthe Highland.

She was tasked with modernising and expanding the existing restaurant over the water with overhanging decks and caves.

She said she was very proud to be part of the project to help revitalise the family-owned business and create an overwater dining experience for patrons.

“This was a one-of-a-kind project because you don’t often get the chance to build on top of the water,” Williams said.

“I’m never afraid of a challenge, but it was tough – it was hard because we had to retain the takeaway and restaurant section, but also replace the wharf at the end which was falling down.

“I had to make a structure that was striking and smart.

“It was a challenge to make all three sides of the structure as attractive as possible as it was visible from every side.

“And you know people are going to talk about it.

“This was the type of project where you put your whole skill on the line because everyone is there to critique it.

“I’m proud to be a part of such an iconic restaurant – it’s been there forever, it was built over the water, and it will be there for a long time.”

Williams said she was offered the six-month project after completing work for the Wharf’s owners previously.

“I originally did a renovation on their house in the early 2000s and then they said they needed some renovations on the wharf too,” she said.

“The main need for the renovation was to maintain the existing pier and create a new restaurant out back.

“There were a lot of challenges with government departments as we had to get approval from several government bodies – it was a lot of paperwork and logistics.

“Whilst we were putting the pier into the water, the same time the actual building was being built off site by Parkwood Pre-Fabricated Homes.

“It was craned into position over the water and brough down on a truck in three parts.”

Williams will now feature as one of the winners in the upcoming edition of Winning Design magazine.