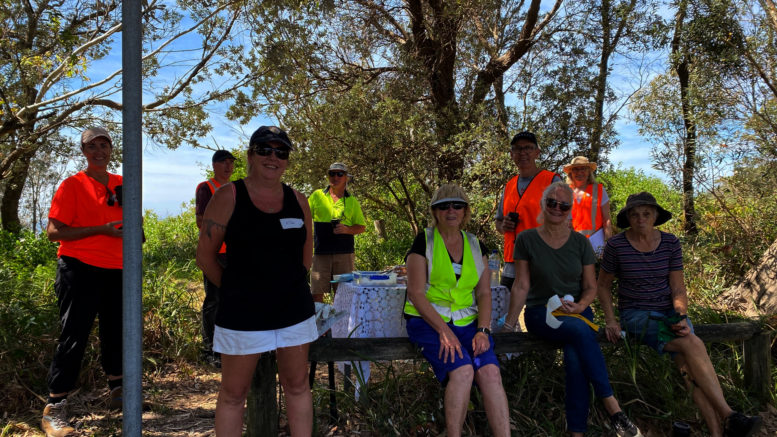 Visitors and residents of Bateau Bay can now walk in safety from Shelly Beach to Crackneck Lookout completely in the bush, away from busy traffic along Bateau Bay Rd.

Residents banded together to remove mountains of noxious weeds and rubbish to create an informal, environmentally friendly bush path, safely away from traffic and at the same time saving valuable car space parking along the road.

Back in July, during lockdown, residents of Bateau Bay began writing letters to local politicians, Crown Lands and Central Coast Council to see if a dangerous section of the Coast Track between Blue Lagoon and Shelly Beach could be made safe for residents and their children.

This section was the only part of the Coast Track between Crackneck Lookout and Shelly Beach where pedestrians were not safely away from traffic.

Project organiser, Judy Townsend, said it was obvious the job was immense but nobody could have predicted the incredible support of Bateau Bay residents.

“The first working bee on the October long weekend attracted only six workers, growing to 17 the following day,” she said.

“Residents who couldn’t attend the clean-up came afterwards to pick up dozens of bags of weeds to put into their green Council bins and 10 locals also arrived throughout the day pulling their green bins behind them to fill with weeds.

“Seeing the wonderful but short section of safe bush path the volunteers had produced in a few days was the stimulus for the most amazing week to follow.

“We were swamped with offers of help to try to complete the next 400m of path down to Shelly Beach the next weekend.

“Bushcare helpers and volunteers tied yellow ribbons to valuable trees and plants that had to be saved and volunteers struggled through overgrown bush to outline the future safe bush path.

“More residents stepped forward to remove dangerous glass and rubbish and the following day others arrived to clear the way through almost impenetrable lantana and bitou bush.”

Townsend said generous residents offered their trucks, trailers and utes to remove piles of weeds and others donated money for tip fees and hiring skip bins.

“It truly was such a wonderful community effort and even one resident who couldn’t come to the working bee put down a tab at a nearby café to keep the volunteers supplied with refreshments,” she said.

“Bateau Beach Café and Munchas Café at Shelly Beach also chipped in for the volunteers.

“Thank you to David Mehan MP and Emma McBride MP who were tireless with their constant support of this valuable community project.

“This project showed community spirit at its finest,” Townsend said.

Dan and Merrin Moir said it was a path that was so needed.

“It’s life changing for us with two little kids trying to get down to Shelly Beach in safety.”

Kyal Demmrich said he felt proud to be in a “can do” community.

“There’s no doubt in my mind that we have stopped a tragedy from happening,” he said.

Grant Ward filmed a video of the community project, taking viewers on a journey along the path, which is posted on the East Bateau Bay residents Facebook page.