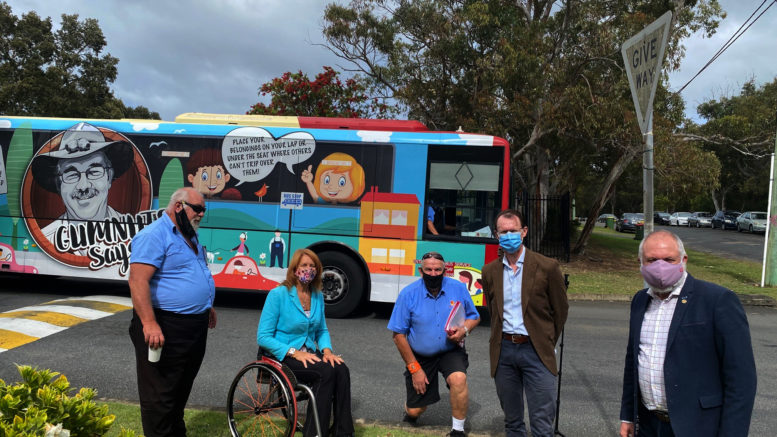 Central Coast MPs have called for smaller operators to get a fair go against multinationals in response to the NSW Government’s decision to make Red Bus Services, which operate across the northern part of the region from The Entrance and Wyong down to Gosford, reapply for its Central Coast contract in a competitive tender.

The Region 7 bus contract, which encompasses commuter and school transport routes linking communities across the Coast, has been put out to open tender by Transport for NSW.

Red Bus Services, which has been operating in the region since 1923 and employs more than 160 local staff, holds the current seven-year contract but may be forced to compete with multinational companies in an open tender process for the 2023 contract.

“Each tender requires a $250,000 deposit which is a significant amount for a local business like Red Bus Services to come up with but it’s merely a drop in the ocean for a multinational,” the MPs said in a joint statement.

“Recent open tender processes, following the privatisation of Sydney and Newcastle bus services, have been awarded to multinational businesses (and) have resulted in a loss of service to those communities,” they said.

“Labor MPs want to ensure that smaller operators, like Red Bus Services, can make a bid on an equal basis with multinational corporations.”

Wyong MP and Shadow Minister for Central Coast, David Harris, said small regional operators should be given a weighting in the tender process to ensure they are competitive and protect local ownership and employment.

“It is so important that companies with a long history and local knowledge are supported as long as they are meeting all of the compliance criteria,” he said.

The Entrance MP, David Mehan said the first Motion he will move in Parliament this week will be support for Red Bus Services to have an equal footing in the tender process and Gosford MP, Liesl Tesch, said the State Government has the capacity to propose a tender process which does not allow Aussie profits to go off-shore.

“This Government needs to add a factor to consider the benefit to local communities of local operators in their tender processes, rather than global corporations whose profits and local-knowledge do not value-add to our community,” she said.

Swansea MP, Yasmin Catley, joined the call and said she looks forward to returning to Parliament and fighting for the Coast.

“The people of Swansea know too well what happens when the Liberals hand over our bus services to multinationals,” she said.

Bus drivers and other staff at Red Bus Services, based at Bateau Bay, started a community petition last month to show the Government support for the local company. The petition now has more than 6,000 signatures.

“We understand they’re trying to get the best for the state, the best for the community, but we don’t see how a multinational in our community is going to be the best for us,” said bus driver David Malcolm at a press conference with the local Labor MPs last Friday.

He said data shows that the company was meeting 98 per cent in performance and the other two per cent were issues surrounding Opal cards which were out of the company’s control.

“This company, which does so much in the community and so much to support the community, deserves to be treated with respect and given a fair go.

“We just want Transport for NSW to renew the seven-year contract like they have always done in the past so the company has some sort of security,” Malcolm said.

“I have been advised that Transport for NSW has recently begun market testing for the Region 7 bus contract which is currently being operated by Red Bus.

“Transport for NSW extensively engaged with Red Bus prior to market testing but unfortunately a sustainable agreement could not be reached.

“Transport for NSW is now inviting all bus companies, including Red Bus, to be part of the tender process so that a sustainable agreement can be reached.

“Factors which will be considered include customer comfort and safety, innovation skills, value and sustainability.

“I believe that Red Bus is a fantastic family-owned, Central Coast-based business and I have full faith in their customer service and value for money.

“I have been advised that Transport for NSW is expecting to complete the tender process in the first half of 2022,” Crouch said.

In times of crisis … we do what we’re told

Be the first to comment on "MPs support Red Bus Service"