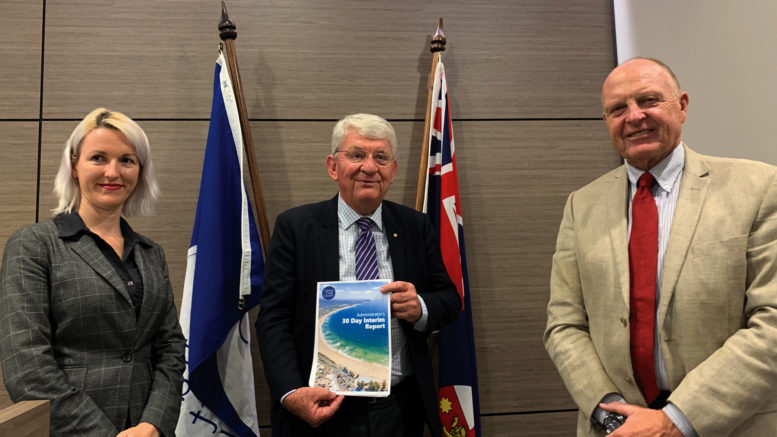 The use – perhaps unlawful – of internal and external restricted funds is expected to be one of the issues examined by the Public Inquiry into Central Coast Council’s financial affairs when Commissioner Roslyn McCulloch begins hearings next week.

One of the Public Inquiry’s tasks is to investigate whether councillors “kept under review the performance of the council, including that council spending was responsible and sustainable by aligning general revenue and expenses” which should include resolving how $175M or more of restricted funds were spent in contravention of the Local Government Act.

One the eve of the inquiry Administrator Rik Hart said internally restricted funds were still being spent to keep the Council afloat but that the expenditure was now lawful and fund balances, as shown in monthly investment reports, were improving.

Since the councillors were suspended 11 months ago $60 million of public assets have been put up for sale, rates are up 13 per cent, harmonisation means some rates are up more than 40 per cent, hundreds of Council employees have lost their jobs and services have been cut.

Council has warned more cuts may be needed unless IPART permits a permanent 3 per cent rate increase and higher water and sewer rates.

The Council has borrowed $150M, on undisclosed commercial terms, in addition to its already substantial debt.

Despite all the measures listed above, the Council is still relying on internally restricted funds to pay costs, including payroll, almost a year after the suspension of Councillors.

According to Hart the NSW Office of Local Government gave Council permission to continue to use restricted funds up to a cap of $175M when Council was placed in administration last year.

Local Government Minister, Shelley Hancock, did not give the elected Councillors permission to use externally restricted funds when they sought her assistance having learned that restricted funds had been spent without their knowledge or permission or that of the Minister.

Interim Administrator Dick Persson initially highlighted the alleged unlawful use of restricted funds as a major reason for the suspension of Councillors but later claimed it was the Council’s big budget deficits that were more of a problem.

CCN asked the Minister for Local Government and Office of Local Government for confirmation of the $175M cap arrangement and received the following statement: “The Minister has not received any application from Central Coast Council seeking approval to borrow externally restricted funds.”

When asked on August 30 if Council could cover costs and pay staff without using restricted funds, Administrator Hart answered “No”.

“That is what you see in the investment report, we are still negative, but we are on an approved payment plan.”

Hart clarified this statement on September 22 when he said the balances of external restricted funds were “correct and proper” – repatriated using some of the $150M bank borrowings – so permission from the Minister was not required.

“Now what we are doing is, from the start of this financial year, you will see in our investment report the reference to the fact we temporarily authorised the use of internally restricted funds to fund our business,” he said.

“Now what we are saying is we are just borrowing from them for another month and as soon as we have built up cash sufficiently our aim is to repay them and the $100M loan.”

Under NSW Local Government law if a council decides to put money aside for a specific purpose, that money is called ‘internally restricted’ and can’t be used for anything else without the permission of the elected councillors.

If the Act says money must be used for a specific purpose, it becomes ‘externally restricted’ and the Minister has to give permission for it to be used for anything else.

According to Rik Hart, when he and Interim Administrator, Dick Persson, arrived last year, they found a balance of -$175M in restricted funds in the draft financial reports for 2019-20.

“That is the $175M which is the artificial cap which was applied to us by the State Government,” he said.

“They said ‘it is clearly going to take you time to sort this out so we don’t want you going above that cap’.”

The restricted funds spent prior to administration belonged to the general, water and drainage reserves and included internally- and externally-restricted monies, Hart said.

“The situation we are in is very similar to someone who has got behind with their mortgage – we’ve fallen behind, so we have called the bank and asked for a repayment plan,” he said.

“We are doing it within the law but we still have to repay the totals back so, if you like, we have got that permission from the State Government of a cap of $175M while we are getting ourselves out of trouble.”

CCN has not been able to find a resolution in Council meeting minutes between October 2020 and May 2021 to allow the ongoing use of internally restricted funds.

Council was asked for clarification and provided the following statement: “The previous Administrator inherited the overspent restricted funds when he commenced in his role on October 30, 2020.

“Once the Council had already unlawfully used the restricted funds during the first four months of the 2020-21 financial year (from July to October 2020), there was no action that could be taken to erase this occurrence for the remaining period of the financial year 2020-21.

“It was the former Council’s obligation to make a resolution for the use of restricted funds and they failed to do this.

“Mr Persson had no choice but to operate within the unrestricted fund deficit that had already been determined by the previous Council’s [alleged] unlawful actions.”

Administrator Hart said Council’s financial position was gradually improving thanks to access to grants from the Commonwealth and State Governments.

He said $20M in internally restricted funds had been “unwound” by Interim Administrator Persson.

“When we had the grand total of -$206M, money had already been spent, so we unwound the $20M to wipe off that part of the debt.

“Some of the ones we unwound were the infrastructure reserve, waste disposal and land development reserve,” he said.

Last month Administrator Hart passed a resolution to allow the ongoing use of internally restricted funds.

As for how the original -$175M had been spent without the knowledge or permission of the elected Councillors between September 2017 and October 2020, Hart said: “We don’t have the power to ask questions of people previously around.

“There’s no evidence one way or the other until people are asked by the Public Inquiry Commissioner under oath.”