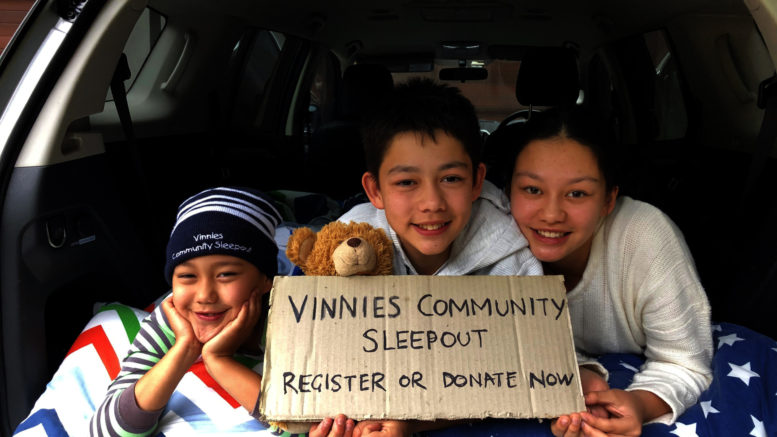 The 12 Central Coast teams who participated in the Vinnies Community Sleepout last Friday have already collected $24,604 to raise awareness of homelessness and to support those people sleeping rough.

St Vincent de Paul’s Regional President, Annette Johnstone, said that although the event had already been held on August 27, people could still donate.

“We had planned for the sleepout to be a live event and it was meant to be held at Lisarow Public School.

“We were going to watch videos and have guest speakers such as Vinnies NSW CEO, Jack de Groot, and The Entrance MP, David Mehan, come along but we changed to a Zoom event due to lockdown.

“I think we did really well, between the Central Coast and Sydney, we’ve already raised $89,000 which has nearly reached our state goal of $100,000.

“We had around 58 people in the Zoom event and we learnt about homelessness on the Coast and in Sydney and the factors that contribute to it such as the rental crisis and the impacts of COVID.

“I slept on my back deck this year and it was very cold, I ended up going to my real bed at around 6am as I couldn’t really sleep.

“Last year I slept in my car in the driveway and that was the scariest night of my life.

“I could hear every little noise being made.

“Last year we also held the event virtually, but it wasn’t very interactive, it was mainly watching videos together, whereas this year we made it more interactive with our guest speakers and everyone participating could ask questions,” Johnstone said.

The Entrance MP, David Mehan, who is also a local spokesperson for Vinnies NSW took part in the sleepout, sleeping in his backyard with his dog Gruff.

“Homelessness is a major issue across NSW, and I am looking forward to helping raise awareness and much needed funds for this worthy cause,” Mehan said.

The money raised from the event will be donated to St Vincent de Paul Support Centres across the state including those located at Wyong, Gosford and Woy Woy.

The money will go towards providing vital access to food, crisis accommodation, case management, financial assistance as well as providing homeless people with blankets and OPAL cards to help them get to temporary accommodation.

In 2019, the Government Department of Communities and Justice Engagement Week Program identified that of those sleeping rough on the Coast, 57 per cent in Woy Woy and 71 per cent in Gosford identified with a high vulnerability score and needed ongoing assistance with housing and support services.

The data also found that the eldest respondent sleeping rough was 70 years old, and the youngest was 24, and the average age of homeless people on the Coast was 49 years old.

The average duration of time spent sleeping rough was about five years, according to the data.