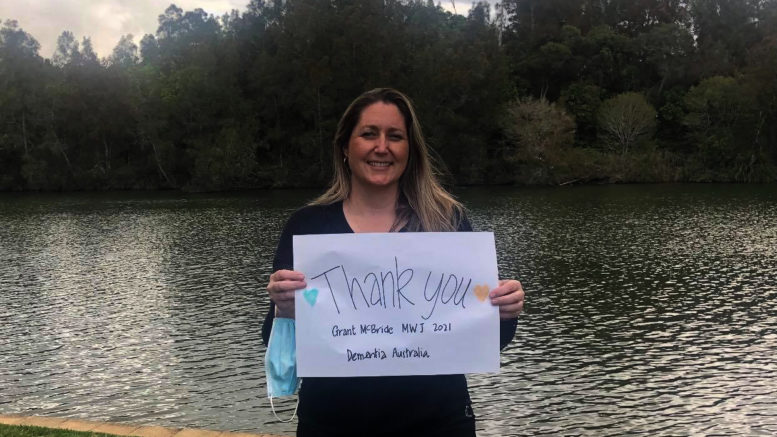 Federal Member for Dobell, Emma McBride said thank you to all that participated in the 2021 Grant McBride Memory Walk and Jog

The 2021 Grant McBride Memory Walk and Jog was a huge success over the weekend, with people across the Coast and around the country participating to raise funds and awareness for Dementia Australia.

The event was virtual for the second year in a row due to COVID but managed to raise over $13,500 which was more than double the original target.

Federal Member for Dobell, Emma McBride, said it was an incredible effort.

“We were hoping to raise $5,000 to start with, but we absolutely blitzed that.

“It was heartwarming to see so many people getting involved on Saturday including Coasties, other MPs around Australia, and friends and family near and far.

“Dementia touches so many Australian families, including my own and it was very special for all of us to come together over the weekend,” McBride said.

The event was first created in 2018, in loving memory of McBride’s dad, Grant, who passed away from Younger Onset Dementia at just 68-years-old.

Over the past four years, the event has raised more than $61,000 for Dementia Australia and helped raise awareness by encouraging people to get active.

“Over the weekend, we saw people getting out and walking around their backyard, their neighbourhoods and their local parks and it was great to see them sharing photos on social media too.

“The more we spread the word and talk about Dementia, the more we can help to reduce the stigma.

“This is a heartbreaking disease but together, we can help create a better future for all Australians,” McBride said.

Be the first to comment on "Memory walk target blitzed"