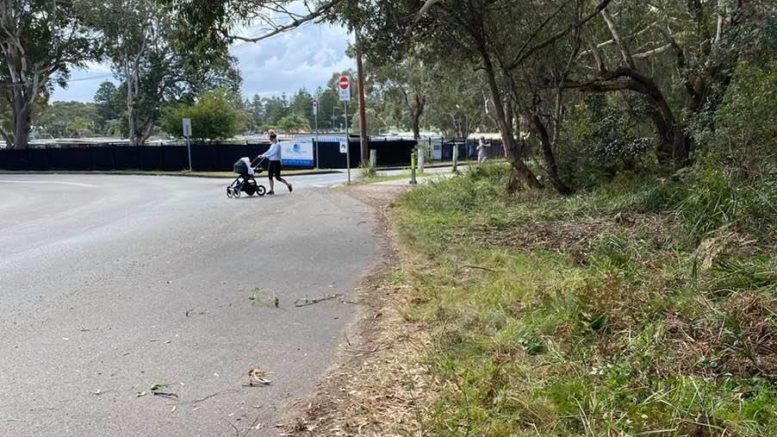 The dangerous curve where the path to Shelly Beach starts

The online meeting was put together by Federal Member for Dobell, Emma McBride, and The Entrance MP, David Mehan, to support residents trying to get a safe walking path along a section of Bateau Bay Rd.

They wanted Central Coast Council to clear an overgrown 200m section along the ocean side of Bateau Bay Rd, where grass and bitou bush had covered the informal off-road pathway between Blue Lagoon and Shelly Beach, and walkers were being forced out on to the road.

It is Crown land, under the management of Council, and their advice was for people to use the footpath on the other side of the road, and cross at the pedestrian refuges.

Resident, Judy Townsend, who has rallied the community to have the situation improved, said that was not a safe option.

“The idea that you would cross the busy Bateau Bay Rd at Blue Lagoon at the pedestrian island, walk two blocks along to the Shelly Beach access path, and then have to take your life in your hands to get back across Bateau Bay Rd at that notorious curve in the road is definitely not the safe option,” she said.

When residents first raised the matter early in August, Council said it had no plans to remove vegetation to clear the informal path but since then Council staff have attended a site meeting with community members.

Earlier this week Council made a start by slashing then mowing some of the weeds on the verge but the community would like to see the path completed.

“We really don’t want much, it’s not as though we’re demanding a proper engineered footpath, we just want the removal of weeds to make a safe simple off-road path,” Judy Townsend said.

“To have this missing link completed would mean walkers would be off the road all the way from Shelly Beach along The Coast Track to Crackneck Lookout,” she said.

The local MPs, Emma McBride and David Mehan, have called Thursday’s open public meeting via Zoom so they can understand the community’s perspective and determine the next steps.

“As a Landcare volunteer on the Coast and a local MP, I want to make sure our community has safe access in and around our region,” McBride said.

“The section between Shelly Beach and Blue Lagoon is often described as a missing link in Bateau Bay.

“The area is popular for locals and visitors, but without a pathway it’s dangerously close to traffic.

“People in our community want to see this area connected, so we can have safe access around Shelly Beach and Crackneck Lookout.

“I’ll be joining David Mehan, Member for The Entrance at a community Zoom meeting about this on Thursday and I am looking forward to hearing more from Bateau Bay residents about their concerns and their plans to create a safe pathway in the area for the future,” McBride said.