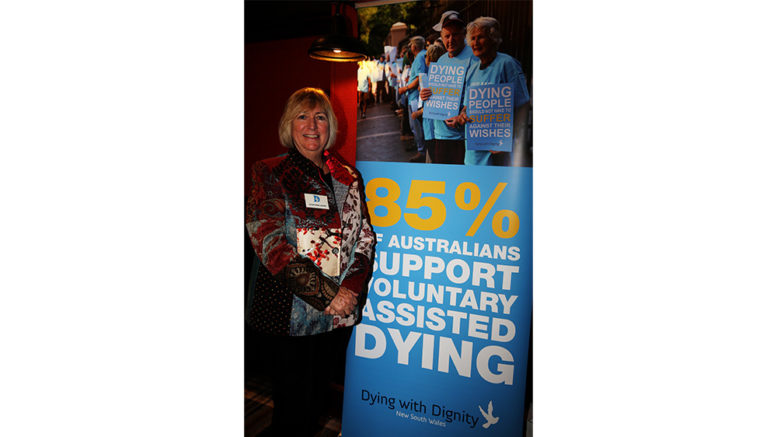 Peninsula resident and Chair of the Central Coast Group of Dying With Dignity NSW, Stephanie Short, believes NSW is at risk of being left behind as every other state now has Voluntary Assisted Dying Laws (VAD).

Short is calling on local residents to write to members of the NSW Legislative Council (upper house) where the last VAD Bill was lost by one vote.

“As Queensland’s Parliament passed Voluntary Assisted Dying legislation last week every MP from the major parties voted according to their consciences and refrained from having to adhere to party policy,” Short said.

“On Thursday evening, September 16, after 55 separate amendments had been debated and rejected, the legislation passed 61 votes to 30.”

Premier Anastasia Palaszczuk, said: “This is about choice.

“This is not about me or anyone in this House telling someone else what to do.

“This is about the choice of an individual to say how they wish to end their life with dignity.

“Dignity is a word that I hold dear to me.

“There is dignity in work.

“There is dignity in the family and the friends that surround you.”

According to Dr Stephanie Short, “On the Central Coast we are fortunate that all our Members of Parliament support the proposed Voluntary Assisted Dying Bill: Liesl Tesch (Gosford), Adam Crouch (Terrigal), David Mehan (The Entrance) and David Harris (Wyong).

“In New South Wales it is wonderful to see the National Party, through their leader  John Barilaro, giving their support.

“They are listening to their communities.

“As John Barilaro says, both the state and the church should keep out of individual lives.

“VAD was brought in to provide patients control over their end of life.

“Evidence locally and internationally tells us that the desire to pursue VAD is rarely about uncontrolled symptoms.

“In the Victorian Community of Practice audit, only one case of over 340 cases  reported uncontrolled symptoms as the sole reason for applying for VAD.

“VAD is about choice, exerting control over one’s own circumstances.

“This is why it was brought in in all the other states, this is why terminally ill people apply for it and this is what we must strive for when the VAD Bill is tabled in the New South Wales Parliament later this year by Alex Greenwich, Independent MP for Sydney.”

Short’s own interest in and commitment to VAD originated from a “formative experience” in her own life.

“It really started when my grandmother died in the family home, my father had built a granny flat on the back for my grandparents and fortunately we had a really good GP and my father was a GP as well.

“She had adequate pain relief and I always feel we were relatively privileged to be able to allow her to die at home peacefully at home.

“Our GP was very supportive of pain relief and my grandmother had a peaceful death at home and I thought everyone should have that right if they choose.

“It is people who are more connected who are able to get the care they need and that is why it is an equity issue,” she said.

She said garnering the support of Members of the NSW Legislative Council was going to be crucial.

Dying with Dignity campaign in its 25th year