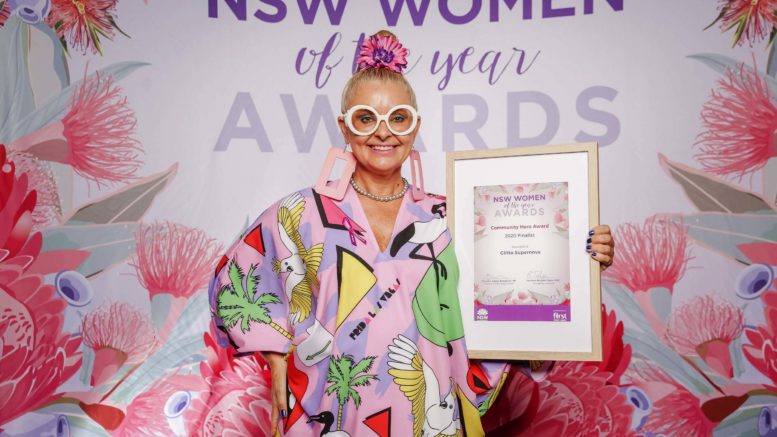 Glitta Supernova was recognised as a finalist for Community Hero of the Year at the 2020 NSW Women of the Year Awards Photo: Salty Dingo

As nominations for the 2022 NSW Women of the Year Awards close this Friday, CCN has taken a look back on one of the finalists of the 2020 award – Umina’s Glitta Supernova.

The awards aim to celebrate the achievements of women from all walks of life and recognise excellence, dedication, community support and entrepreneurship.

Some may know Glitta for her work as Creative Director at Naughty Noodle Fun Haus, or as Festival Director for the annual Coastal Twist Festival, but what people may not know is that she is a fierce advocate for the community.

Glitta said being recognised for the award last year enabled her to keep motivated and focused on delivering support and opportunities to locals.

“It was a personal and professional validation that multigenerational neglect … in the region has started shifting [and] that community desire for change is measurable and matters,” Glitta said.

“It showed me that human rights and social inclusion are not going to sit on the bottom shelf as a ‘fringe’ cause on the Central Coast, but rather that we are partaking as a region in global progress and that positive impacts for our community will be celebrated at a state level.

“I have a very clear memory of last year’s Woman of the Year Awards and Gladys Berejiklian’s speech referring to regional communities as needing ‘to break down walls, not build new ones’.

“There were some local Coastie politicians present and I hoped it presented them with ‘permission’ for new thinking and opportunities to strive for inclusion of their whole communities, to be brave and to innovate for our community and for themselves.

“What keeps me going, believe it or not, is the bigots, blockers and gatekeepers and on the other side it’s the stories of those who came before me and chipped away for change, that elevated and inspired my work.

“We still have a long way to go in the cause for equality – not only in our region but globally.”

More recently, and before the start of the current outbreak, Glitta had helped launch a new monthly social night called ‘ThursGAY’ to help support local talent and foster a safe space in the community.

She said she was most proud of the visibility she has helped the Coast foster as a ‘more welcoming region’ for Sydney visitors and beyond.

“I am so very proud of being a cog in the wheel of our region’s improved wellbeing, the beginnings of better perceptions, acceptance and our reach for better,” she said.

“Who would have thought three years ago that people would be hitting the Coast for unique, contemporary socially-conscious entertainment that is promoting the visibility and voices of women, LGBTIQ, Aboriginal and Torres Strait folks and artists with disabilities?

“We have all heard the slogans about the power of creativity to change the world, it took me a while to get my head around the implications of holding firm as a woman, as a leader, and as an artist when existing old patriarchal narratives feel that you’re in their way.

“It surprises no one how far people are prepared to go to stop that inclusion and culture shift.

“Change is here … from the simple things most people take for granted like feeling a little safer to hold a partner’s hand on the street, to inclusion of women of all ages and abilities being able to be not only represented but embraced on stages and through broader regional inclusion.”

One local representative that paid credit to Glitta’s achievements was Member for Gosford, Liesl Tesch.

“As a Central Coast MP, I was absolutely thrilled to join Glitta Supernova, and celebrate her work on visible inclusion and the positive impacts to our region at the 2020 Woman of the Year breakfast at the International Convention Centre,” Tesch said.

“Glitta has become a Central Coast icon, doing fabulous work across our community, especially in inclusion and tourism.

“Now more than ever we need to embrace new ideas and possibilities, celebrate creativity and the arts, and come together in better ways to meet the next challenges.”

“Most people working for community are over worked with their head down on the mission,” Glitta said.

“I can say, without question, that the Coast is overflowing with unsung heroes from all walks of life, ages, genders, culture and abilities.

“All are focusing on the work that needs to be done, pushing hard for positive change, for no one to be left behind, for funds, for alliances and to ensure we evolve, become more equitable, more tolerant, educated and more involved as a community.

“Recognising community heroes is a way for that person to lift their head up and retrospect, see and feel the impacts and it helps put into perspective all that hard yakka which is not for the faint hearted.”

Nominations for the 2022 awards close on Friday, September 17 and can be made at: https://facs.smartygrants.com.au/WOTYA2022