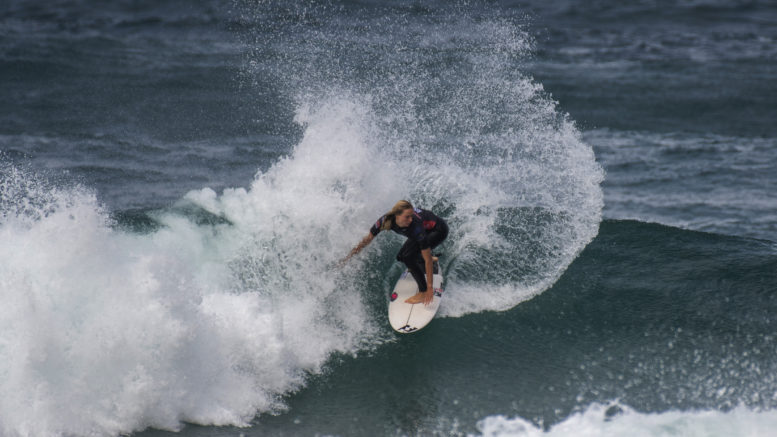 Avoca Beach surfer Macy Callaghan looked strong following the Round of 64 in the 2021 Challenger Series at Huntington Beach, Los Angeles.

The sun shines on the Californian shore but surf conditions have been far from ideal.

One- to four-foot waves have been crashing onshore with a slowly picking up cross wind deforming their shape.

Surfers have needed to approach the waves tactfully and exert a lot of energy through their boards to generate the power lacking in the water and wind.

The strength Callaghan’s backhand steer to the left made the difference and ensured her opening heat win despite strong competition coming from Portugal’s Teresa Bonvalot.

Macy took the lead early with the heat’s best score of 6.50, secured with multiple re-entries as she followed the wave back and forth in search of critical points.

With five minutes left, she topped this off with a 6.10 score, again found along the left line, making her the second-highest scoring competitor after seven heats.

Although going into the heat a favourite after a stellar past season at Australian Qualifying Series events, Picklum found little beyond frustration in the tepid waves.

Her best score of 5.30 came on her second-last attempt but could not make up for earlier missed opportunities in the desperate search for the right wave.

For Carmichael, early attempts to find the rhythm of the water were outmatched by Brazilian, Edgard Groggia, and Kade Matson from the US, who took over late with a couple of 5-7 point waves each.

The women’s competition has now moved into the Round of 32 and will include three more rounds before a one-on-one final.

This is the first of four Challenger Series events this year where there are 10,000 points on offer towards the qualification for the next Championship Tour.

This will see the band of surfers travel next Portugal, then France, and finally Hawaii, all scheduled before Christmas.

There will be more opportunities soon for Macey, Molly and Wade to take out points and enter themselves into the world’s top tier tour.