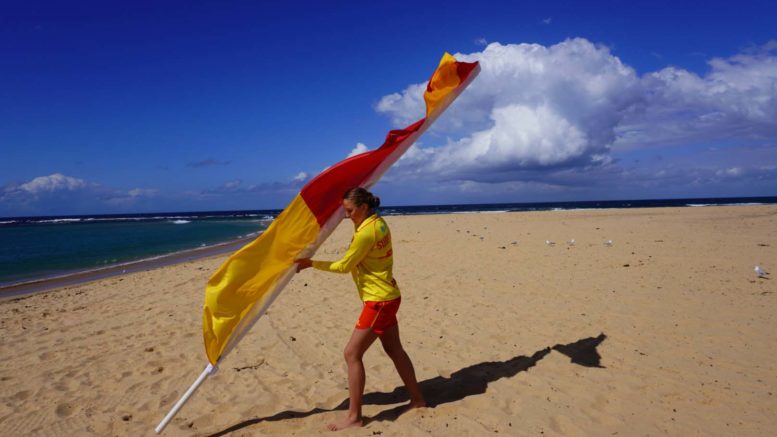 Central Coast volunteer surf lifesavers raised their iconic red and yellow flags at Toowoon Bay on Monday to signify the start of the season this Saturday, September 18.

The 15 clubs have been working tirelessly behind the beach to prepare and make sure all members and equipment are ready to take to the surf and sand for another season, albeit with some modifications to ensure the public and members are kept safe both in the water and on the beach.

The 9,000 hours of service the 15 clubs provide each season is an integral part of ensuring our community is kept safe while visiting the beach.

CEO of Surf Life Saving Central Coast, Jon Harkness, said that this year, due to COVID, the raising of the flags ceremony was done differently.

“This year we did it virtually.

“For surf lifesaving NSW, the message is the flags are up and they’re up for a reason, for surf safety.

“We patrol 15 different beaches here on the Coast and we encourage everyone to swim on these patrolled beaches as the statistics have proven we don’t lose people on those beaches.

“Last year we lost two people at unpatrolled locations which is really unfortunate and it’s not what we want to hear, and we’re encouraging that everyone stays between the flags as normal,” Harkness said.

Director of Life Saving at Surf Life Saving Central Coast, Simon Cusack, says its awesome having the flags back up for the safety of beachgoers, giving them somewhere safe to swim.

“We will be restricted to our patrolling numbers due to the current health orders and we’re following NSW Health guidelines, and Surf Lifesaving NSW guidelines.

“We will be socially distancing, always be wearing masks except when we’re in the water, and we’ve got to follow the health orders like everyone else.

“You can still get out there and enjoy the beaches, just please don’t gather in large groups.

“The best thing you can do is go down to the beach for a swim and then go home.

“If we can’t see you, we can’t save you, so if you’re swimming at an unpatrolled location, you’re putting your own life in danger because it reduces our chance of us being able to get there on time to be able to save you and let you go home to your family.

“It’s the worst nightmare, going to recover a body.

“Last year there were 648 rescues and close to 43,000 preventative actions and there were 9,000 patrol hours last season.

“Lakes Beach won the Rescue of the Year Award, and the young guys involved with that rescue rescued 18 people.

“They hadn’t long done their bronze medallion and the Lakes Surf Club actually run a program with one of the schools up north (St Brigid’s Catholic College) and that’s where these young guys came from.

“If it wasn’t for those five guys, we probably would have lost 18 lives that day.

“They did it without rescue equipment as well, they used boogie boards and that sort of stuff, and they did a great job.

“Surf conditions change in the blink of an eye, you can be in a nice spot swimming and all of a sudden there can be a flash rip so that’s why we say swim between the red and yellow flags,” Cusack said.

Despite a 34 per cent increase in visitors to Coast beaches, the volunteer lifesavers managed preventative actions and rescues to an increase of only 11 per cent, meaning the commitment and strength of the volunteer patrolling members is second-to-none in managing the beaches and public safety.