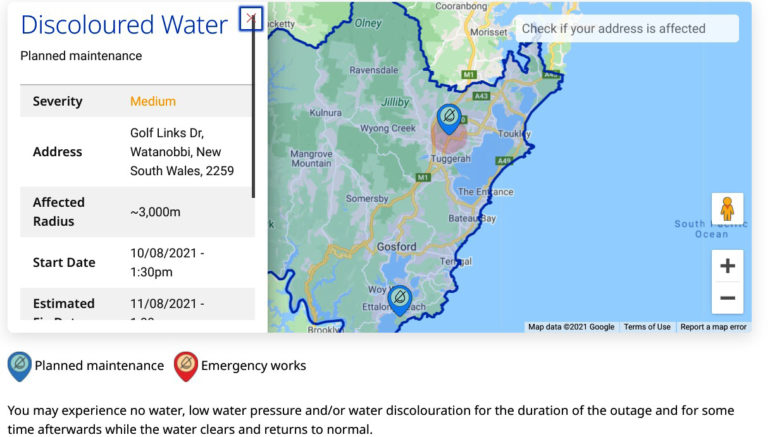 Water outages map which can be found on the Council website

Central Coast Council now has a map on its website which shows residents in real time what water outages are impacting suburbs.

Administrator Rik Hart explained the new map was now live, and residents could see what planned works, maintenance and emergency works were taking place and estimated times and severity of impact.

He was speaking at the August 10 Council meeting.

At the start of each meeting, Hart gives an overview of his work since the previous meeting.

He said non-urgent work had resumed around the Coast with staff working on footpaths and roadworks including the Tuggerawong and Umina foreshore shared tracks and Woy Woy wharf construction.

He said he had received about 80 emails from ratepayers after rate notices went out this month and that he would reply to all those emails.

The consistent concern was that rates had increased by more than the 15 per cent that IPART (the Independent Pricing and Regulatory Tribunal) had granted Council.

He explained the rates included harmonisation between the former Gosford and Wyong councils and the latest land valuations which had seen land in the Gosford area increase by an average of 27 per cent more than Wyong.

Hart and the CEO David Farmer had met IPART on July 27 electronically, he said.

Hart had asked for the meeting as he wants IPART to agree to the Coast’s 15 per cent rate rise to continue after the three years that IPART has currently stipulated.

Hart said the Public Inquiry into Council’s financial mismanagement had released the list of the 97 people who had put in submissions.

He said he expected the first and last week of September would see public meetings being held and he knew that the inquiry was contacting people it wanted to interview.

Both Hart and Farmer had put in submissions.

Since the last Council meeting Hart had met, again electronically, with Hardys Bay residents about issues in their community and he had met with Local Planning Panel (LPP) chair Donna Rygate.

He had called the meeting so he could ask how Council’s downsizing was impacting the LPP and Rygate admitted it wasn’t as fast as in the past and the support to the panel wasn’t as good as it had been, but she understood the reasons why.

In an update on the proposed referendum, Hart said it wouldn’t be proceeding on December 4.

A paper will come back to Council advising on the way forward: but the referendum would happen, he said.

He concluded his update by noting that no residents had requested to address the Council at either the public or open forum.

He said that was unfortunate.

“We welcome people participating,” he said.

Amazed at such a massive deficit