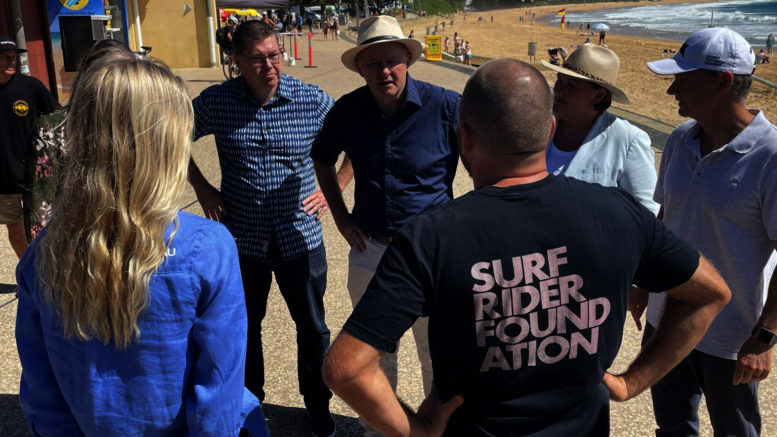 Federal Labor Leader, Anthony Albanese, and concerned residents at an anti-PEP11 rally at Terrigal in April, 2020

Labor Member for Dobell, Emma McBride, and Labor Member for Gosford, Liesl Tesch, are ramping up the pressure on Federal Resources Minister Keith Pitt to make a final decision on the renewal of the PEP11 licence.

Deputy Premier John Barilaro has already recommended that the permit for off-shore gas exploration, which expired on February 12, should not be renewed, but Pitt, as the other Minister responsible under the Joint Authority, has continued to remain silent.

This is despite state and federal politicians, both Labor and Liberal, including Prime Minister Scott Morrison, opposing renewal of the licence.

Advent Energy’s PEP11 renewal application would allow oil and gas exploration drilling off the coast from Port Stephens to Sydney for another two years.

“Resources Minister Keith Pitt can stop PEP11 with the stroke of a pen today, and as long he continues to stall, the Coast remains at risk,” McBride said.

“The Prime Minister and other Government MPs say they’re opposed to this project, but their own Minister still won’t make a decision.

“While I support the new Bill proposed by Independent Federal MP Zali Steggall to stop PEP11, it is unlikely to be introduced to parliament as the government sets the legislative agenda.

“The renewal rests in the hands of Minister Pitt, and I urge all of our community to send their opposition straight to his office.”

Tesch said she was hearing constant reports of the environmental and social impacts renewal of PEP11 would have along the region’s pristine coastline.

“Recently the IPCC Report (Intergovernmental Panel on Climate Change) described the impacts on our future if we don’t address the increasingly urgent challenge of Climate Change,” she said.

“I am concerned that PEP11 will have detrimental impacts to our coastal ecosystems and will greatly impact our natural assets here on the Central Coast.

“This will only lead to fewer natural assets for future generations to enjoy, and the loss of valuable tourism assets, such as our beaches and waterways, which many of our local businesses rely on to draw people to the Central Coast.”

A petition to STOP PEP11 can be found at https://emmamcbride.com.au/petitions/stop-pep11/.