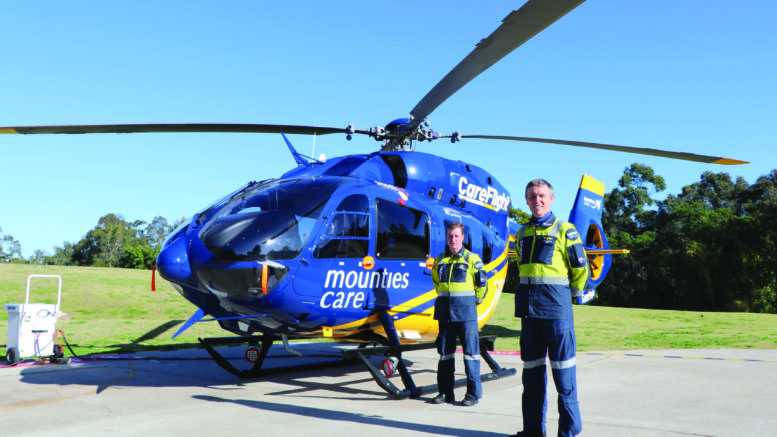 After successful amalgamations with Halekulani Bowling Club and Club Wyong in the past 12 months, the Mounties Group is flying high with the biggest sponsorship and community support package known in club history.

Staying true to the Mounties profit-for-purpose ethos, the extensive deal helps to support CareFlight as it launches the new Airbus H145, part of the next generation of NSW’s Aeromedical Helicopters.

The new helicopter will be one of the most advanced aeromedical helicopters in Australia.

Branded as the Mounties Care – CareFlight Helicopter, it will be dedicated to saving lives in Greater Sydney, the Central Coast and Blue Mountains.

The Group has enjoyed a rich 11-year history with the CareFlight team, previously supporting them through community donations and ClubGRANTs.

Mounties Group CEO, Dale Hunt, knows all too well the importance CareFlight has in the community after a CareFlight team saved his own son’s life.

“Without CareFlight my son would not be here today.

“I wholeheartedly believe this, and I know there are many others that share the same sentiment as I,” Hunt said.

“The new helicopter is like nothing you have ever seen before.

“It is state of the art technology and I am incredibly proud that this is now out servicing the region and saving lives every day,” Hunt said.

Mounties Group President, Kevin Ingram, believes that it is partnerships such as this that cement the reason the Club formed in 1964.

“This is the next step in enhancing our ethos of improving the lives of our members and our community and that is something our founders, board and members can be truly proud of,” he said.

CareFlight CEO, Mick Frewen, said he was thrilled with the invaluable support from Mounties Group over the past 11 years and believes the creation of Mounties Care has brought them closer together.

“CareFlight is reliant on support from corporates, businesses and people in the community in ensuring it can carry out its mission to save lives, speedy recovery and serve the community.

“This level of support has guaranteed that this much sought-after service will continue on for years to come.” Frewen said.

CareFlight unveils the first aeromedical aircraft of its kind in Australia

Wyong RSL Club is likely to merge with the Mounties Group