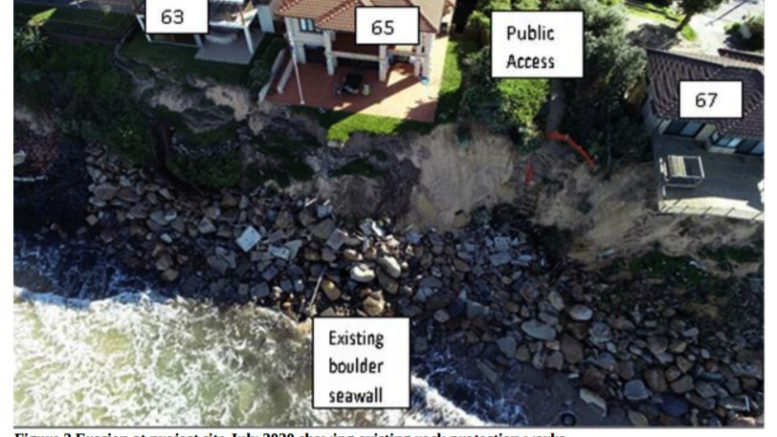 Both sites lost their beach access stairs in the storms last year.

The application says the work of interim rock work and sand replenishment, nourishment and restoration is in response to the significant erosion.

It says the existing profile poses a risk to public safety due to unstable rock and embankment that may result in further slumping/undermining of houses.

“The proposed development is for rockworks, replenishment and nourishment works only to restore the landform and to a safe angle of repose,” the Statement of Environmental Effects states.

“The proposal is to carry out rockworks and replenishment and restoration to the rear portion of the subject land and eastern boundary interface to the beach to make the site safe and secure, and also importantly to comply with the terms of the positive covenant and restrictions on the land title.

“That restriction on title requires the landowner to ensure the land adjoining the beachfront is “at all times properly maintained, replenished and restored”.

The Council is the prescribed authority and party to that restriction.

The application says the works are designed to improve public safety on the adjoining property and beachfront by re-stacking unstable existing rock and placing additional imported armour.

“The works are designed to improve protection against erosion in the short-term, while anticipating permanent works in the near future – yet to be determined by public authorities,” it says.

The proposal is open for public comment until August 8.

“Tarting up” a few parks is not real inclusion