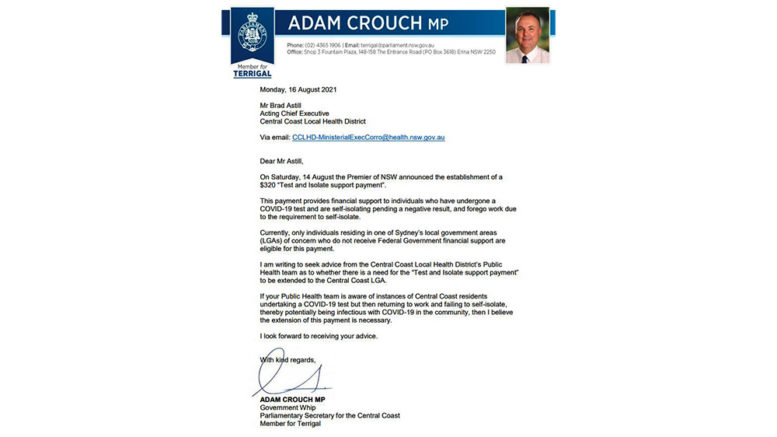 Parliamentary Secretary for the Central Coast, Adam Crouch, has reached out to CCLHD regarding the test and isolate payments

The proposal for COVID-19 ‘Test and Isolate Support Payments’ to be introduced on the Central Coast may be one step closer to fruition.

The payments would help cover the lost wages of casual workers and those who may have exhausted their sick leave or carer’s leave to isolate at home.

Currently, only individuals residing in one of Sydney’s local government areas (LGAs) of concern who do not receive Federal Government financial support are eligible for this payment.

Under the current rules, eligible workers aged 17 and over who live in the LGAs of concern, who are self-isolating pending a negative result, and have foregone work, will be eligible for one $320 payment in a four-week period for lost wages.

The State Government said those waiting on their test results will get the $320 payment in their bank account within three business days of applying online at Service NSW.

Parliamentary Secretary for the Central Coast, Adam Crouch, said he had written to the CEO of Central Coast Local Health District, Brad Astill, this week regarding the Coast’s eligibility for this payment.

“I am writing to seek advice from the Central Coast Local Health District’s Public Health team as to whether there is a need for the “Test and Isolate support payment” to be extended to the Central Coast LGA,” Crouch said in the letter.

“If your Public Health team is aware of instances of Central Coast residents undertaking a COVID-19 test but then returning to work and failing to self-isolate, thereby potentially being infectious with COVID-19 in the community, then I believe the extension of this payment is necessary.”

If Astill advises that the payments should be introduced on the Coast, Crouch will then have the ability to take it directly up to the Premier.

Labor MPs have been calling for the payments to be introduced on the Coast as the number of positive COVID-19 cases on the Coast rose again this week.

Member for Gosford Liesl Tesch said it has been taking an average of five days for Coasties to receive their test results back.

“In some cases, these people get replaced by someone who can work.

“We understand testing companies are doing the best they can, but people are missing out in terms of these delays.

“There is a health initiative here as we don’t want people to go back to work when they’re sick, we want them to stay home until they’re clear.

“But people have to put food on the table, especially if that’s their family’s only source of income.”

Tesch also confirmed NSW Opposition leader, Chris Minns, and the Shadow Minister for Small Business, Stephen Kamper, had both written to Premier Gladys Berijikilian regarding the payments on the Coast.