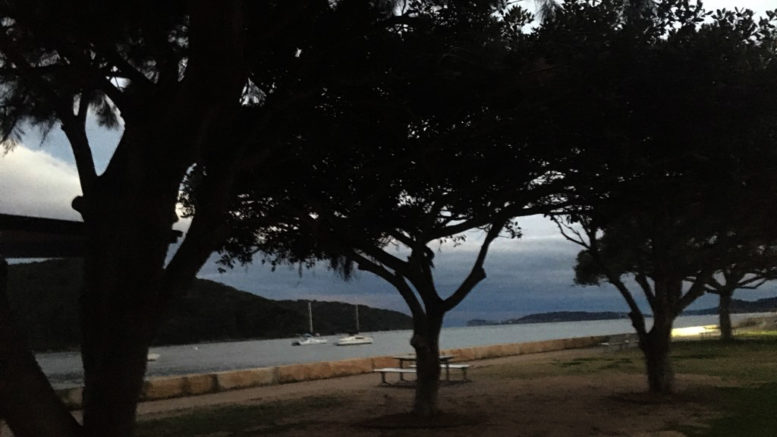 The Ettalong foreshore walk is dark and unfriendly after sunset

Ettalong resident and small business owner, Shery Stewart, has recruited the Member for Gosford and Parliamentary Secretary for the Central Coast to champion her dream of lighting up Ettalong.

When she’s not busy framing retro and vintage prints, Stewart loves to walk along the Ettalong waterfront and kayak around the bay.

“It is beautiful down there along the foreshore which has been upgraded for seven years now but at night it is a completely different story,” Stewart said.

“I went down there to walk at 6pm and there is not one single light from The Box [restaurant], which is in darkness, all the way to Ettalong Point,” she said.

Stewart has joined “all the local groups” and hopes that an existing not-for-profit community group will take up her cause of lighting up Ettalong for security and for vibrancy, she explained.

She said she has presented her proposal to Member for Gosford, Liesl Tesch, and Parliamentary Secretary for the Central Coast, Adam Crouch, both of whom were supportive.

“Adam Crouch has said he would put it forward to the Central Coast Council and Liesl Tesch said she would send a letter with my proposal,” she said.

“I have been thinking about this for the last three or four years because any little village I have visited, I’ve seen what the lighting was like and the atmosphere was like and I come back and look at Ettalong and there’s nothing.

“It all really adds to the atmosphere of the place, all the little coffee shops have grown up around here now but there is just zero lighting.”

Owner of The Box restaurant on the Ettalong foreshore, Monique Keogh, said she agreed with Stewart’s vision.

“Monique told me she cannot leave her staff in the dark and agrees that it is dark and scary,” Stewart said.

“We need to look at solar lighting, so it is low maintenance and gives us some kind of overhead lighting down the path at least as far as the point and at least between the markets and the Ferry Terminal.”

Shery Stewart said her inspiration for better lighting in Ettalong came from visits to Brisbane, Nelson Bay and Forster where “they have converted a really daggy old place into an enlivened marketplace and public area.

“Nothing brings more charm and magic to a village than fairy lights,” she said.

Stewart said she was aiming to have first steps in place by September in her campaign to light up Ettalong.

Improving after-dark security is her first priority and then she’d like to see trees illuminated with fairy lights at least through the summer months.

Residents disappointed by lack of information on dredging

Ferry resumption ‘is not the end of the problem’