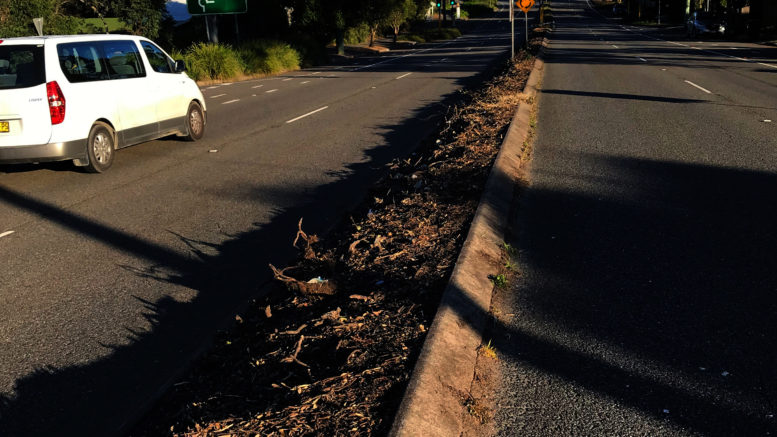 “In another bizarre example of the failure of the amalgamation, Council has begun to remove landscape vegetation from roadways in the region but left the weeds,” he said.

“Over the weekend of July 3 and 4, Council has removed all landscaping vegetation from the median strip on Wyong Rd at Tumbi Umbi, but weirdly, they left the weed infesting the sections not landscaped of that same median,” Mehan said.

“Council has created a serious safety risk as the thick vegetation on the median strip was also a barrier to pedestrians.

“Now there is no barrier and greater likelihood pedestrians will attempt to cross the road at many more locations.”

Mehan said what used to be a feature of our region was now just another ugly road.

“I am baffled as to why Council has the money to clear whole sections of landscaping but no money to trim the vegetation and spray the weeds.”

Mehan has written to Council to request clearing stops until the community is consulted. Council staff met with Transport for NSW to review sites along Wyong Rd where pedestrian and vehicle safety was compromised and the decision was made to clear these sites to ensure safety.

Multiple sites were identified including the centre median east of Cornish Ave roundabout.

“This site was considered dangerous for children crossing the road due to poor lines of sight,” a Council spokesperson said.

“The median vegetation also covered the kerb which is a hazard to vehicles.

“These works were funded by Transport for NSW and Council took the opportunity to spray the weeds in the areas in the vicinity of where the clearing work was being undertaken.

“Transport for NSW road closure rules require all works along Wyong Rd to be undertaken at night due to the road’s high usage, and trimming would require high frequency maintenance which we cannot do at this time,” the Council spokesperson said.

1 Comment on "Landscaping cleared but weeds left to flourish"