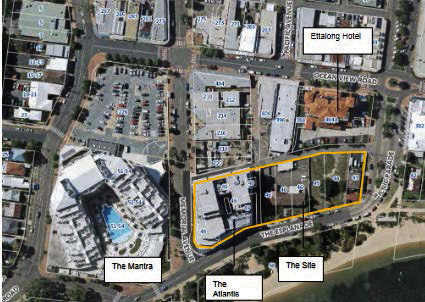 An aerial view of the prime waterfront Ettalong site

A resolution to potentially increase the height and floor space for a prominent beachfront development site at Ettalong has been adopted by Central Coast Council Administrator Rik Hart at the ordinary council meeting on Tuesday, 29 June.

The planning proposal relates to seven lots zoned B2 Local Centre and located opposite the Ettalong waterfront including the recently built five-to-seven storey ‘Atlantis’ mixed-used development.

The NSW Planning Minister must approve a Gateway Determination which will increase the maximum building height from 11.5m (three storeys) to 17m (five storeys) and floor space ratio from 1:1 to 1.75:1 on lots from 43 to 46 the Esplanade, Ettalong.

Council will undertake public authority and community consultation if the Gateway Determination is granted and then a further report will be put to a future council meeting.

“The request to amend the maximum building height, FSR and consolidation of lots is considered to have strategic merit, as it allows infill development in an area that is supported by existing infrastructure and at a scale that is consistent with surrounding development,” the staff report said.

The staff recommendation was supported by the Local Planning Panel (LPP) when it met on June 10.

However, the LPP said the site needed to be “developed as one consolidated lot”.

The Local Planning Panel also called for “standards relating to minimum allotment size, minimum frontage and site consolidation” to be included in the LEP.

“The proposed LEP controls rely on detailed urban design controls being developed in a future Development Control Plan, which should preferably be exhibited alongside the Planning Proposal,” the LPP minutes said.

The LPP called for limiting the overshadowing of the beach, open public space and bushland in the area, allowing for view sharing to the water from other B2 zoned land in the centre, providing for acceptable building separation and setbacks and active street frontage provisions.

It called for a transition in height to adjacent low-density areas and design excellence.

The panel also requested consideration of public benefits such as affordable housing and “public realm improvements” along The Esplanade and Picnic Parade.

In resolving to put the proposal through for Gateway Determination, Hart asked Director for Planning and Environment, Scott Cox: “You are assuring me that we’ve taken into consideration what the Planning Panel has recommended that we do?”

Cox responded in the affirmative.

Concept plans show a single development on six parcels at 43-46 The Esplanade and include basement parking, ground-floor commercial space and four storeys of residential units in two small towers.

According to the staff report, the proponent has confirmed that a public benefit, in the form of agreed public domain improvements, will be delivered as part of the development via a Voluntary Planning Agreement (VPA) and in addition to the usual Section 7.11 developer contributions.

The concept plans showed a shortfall of seven car parking spaces, but Council staff believed this was an acceptable shortfall.

Stockpiles of building rubble and fill, including Asbestos Containing Materials (ACM), were observed during a site inspection and samples collected for testing indicated ACM below the surface.

All demolition work will need to be completed by a licensed asbestos demolition contractor and additional reports provided to ensure the contamination is addressed.

The Council Staff report stated the site was not subject to over-ground flooding, but groundwater was encountered at a minimum depth of 2.5 metres.