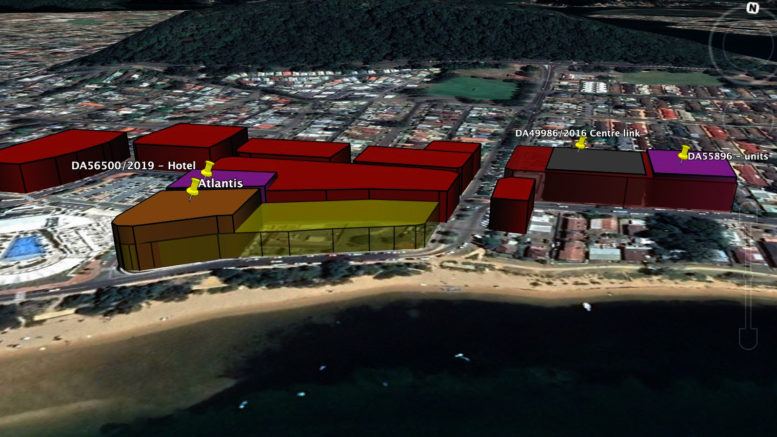 The diagram demonstrates the bulk of the proposed development

A planning proposal allowing beachfront lots on The Esplanade at Ettalong to have a maximum height of 17 metres or seven storeys has been opposed by Residents for Responsible Ettalong Development (RRED).

The Planning Proposal would permit a mixed-use development next to the recently-completed Atlantis building on The Esplanade, proposed to include two small residential towers, if approved.

RRED spokesperson, Peter Gillis, addressed the council meeting and called for Hart to refuse the staff recommendation to put the proposal through for a Gateway Determination.

“The blocks 43t o 46 The Esplanade are currently occupied by a red brick dwelling, a vacant block, and an old motel,” Gillis noted in a submission to Council.

“The blocks have the seven-storey Atlantis building to their east and are bounded by Picnic Parade on the western side,” he said.

Gillis acknowledged the waterfront location was an excellent candidate for redevelopment but said the residents were opposed to rezoning the area to 17 metres for six main reasons.

“A height of 17 metres will constitute a ‘block’ of high rise building adjacent to the waterfront, continuing eastward from The Mantra and Atlantis buildings,” he said.

“There will be significant, and unavoidable, shading issues on the Esplanade and the planted area adjacent to the beach.

“The Atlantis building demonstrates this, despite its setbacks.

“This scale of building is not consistent with the surrounding area – it would continue the high-rise development concept of Atlantis.

“Any ‘agreed public domain improvements’ by the developer will be vastly outweighed by the bulk of a development of this height and FSR.

“A development plan of this height could not possibly accommodate view sharing since all adjacent buildings, except Atlantis, are substantially lower.

“Ettalong Beach has a zoned area of 17 metres height which we refer to as the ‘Commercial Corridor’.

“The Residents are keen to see the zoning height of this area reduced to 3 storeys to reduce any further impacts.”

Rik Hart said he was prepared to put the proposal through to NSW Planning for a Gateway Approval “on the basis it is a preliminary step and the community still has a further opportunity once it has gone through gateway.

“For now I am happy to agree to the recommendation,” Hart said.