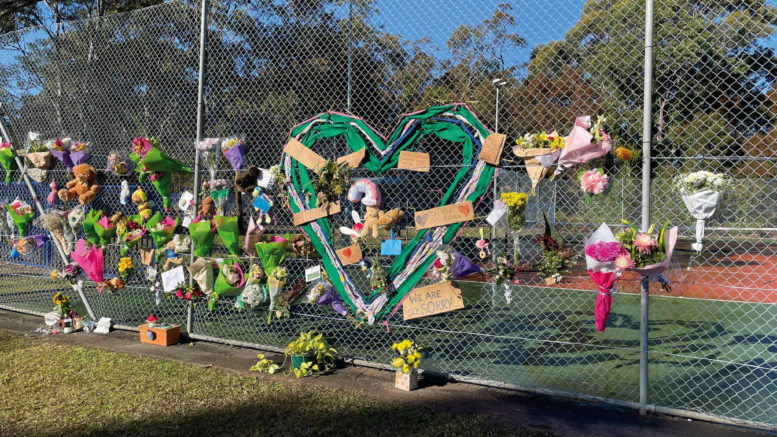 The memorial placed by community members at Kariong tennis court

Members of the Kariong community have united to express their condolences and support to the parents of a five-week-old baby killed by the family dog on July 11.

At about 2.20am, emergency services responded to reports of a baby being mauled by a dog at a home on Jeffs Cl.

Officers from Brisbane Water Police District performed CPR on the five-week-old baby boy and were assisted a short time later by NSW Ambulance paramedics, but the baby could not be revived and died at the scene.

The baby’s parents were at the home at the time.

Jobson said the thoughts of police were “certainly with the parents, the family, friends and also the first responders involved”.

Out of respect for the family, police did not disclose specifics of the incident, but Jobson said a full disclosure of the circumstances would be released to the coroner and that there were no suspicious circumstances.

“The dog involved was a registered animal – an American Staffie,” he said.

“The dog has been seized by (Central Coast) Council and I believe it will be euthanised within days.”

CCN understands that the dog has since been put down.

Within days community members had erected a heart-shaped memorial on the fence at Kariong tennis court, which has been attracting daily messages of condolence.

One resident said the memorial represented the “heart of Kariong” and a chance for community members to express their support in a COVID safe way.

Kariong Progress Association President, Doug Waud, said the small township had seen an outpouring of sympathy for the family.

“The community is obviously very shocked, and you wonder what you can do at a time like this,” he said.

“The family is getting support I am sure, from neighbours and support groups.

“We are just so saddened by the situation.

“Generally, in Kariong all the families that have animals are conscious of (their) behaviour and welfare.

“There has never been an incident such as this.

“Kariong is a young community with a large proportion of young families, and I think the memorial at the tennis court is an indication of what people are feeling.”