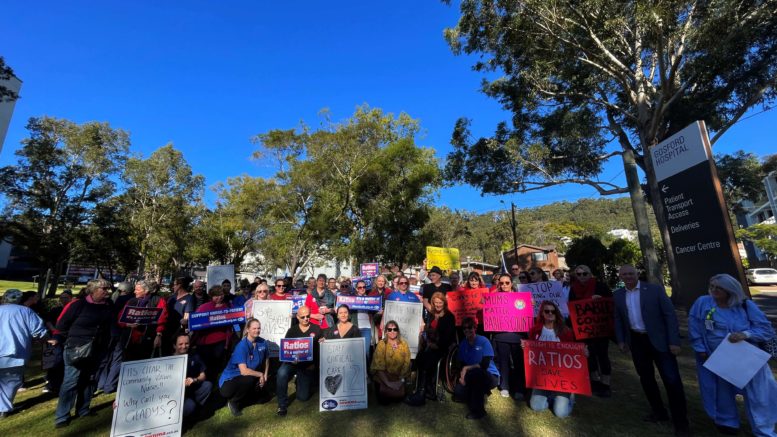 Nurses and midwives rallied outside Gosford Hospital on June 16

Nurses and midwives rallied outside Gosford Hospital and held a stop work meeting at Wyong Hospital on June 16 over the need for safe staffing and called on the NSW Government to introduce nurse-to-patient ratios.

NSW Nurses and Midwives’ Association (NSWNMA) members are calling for staffing to be overhauled across multiple wards and units at Gosford Hospital, including ratios of one to three (1:3) in emergency, paediatrics and post-natal maternity wards, and a ratio of 1:4 on other wards.

Later in the day nurses voted to hold a 2 hour stop work meeting at Wyong Hospital to discuss the issue of staff ratios and dangerous working conditions.

NSWNMA General Secretary, Brett Holmes, said nurses and midwives were run off their feet and felt ignored by the Government when they spoke up.

“Our members are burning out and tired of feeling taken for granted by this government,” Holmes said.

“Concerns for their professional registration and patient safety are very real.

“It is shameful how nurses and midwives are being treated on the Central Coast.

“We desperately need ratios to ensure our hospitals are safe for everyone accessing care and for the staff trying to deliver care.

“Victoria and Queensland have had mandated nurse-to-patient ratios for more than five years.

Shadow Minister for the Central Coast, David Harris, was at the rally to show his support.

“This campaign has been going since before last the last State election,” Harris said.

“Ratios are so important; it’s about patient health.

“When our nurses get tired and overworked it impacts on patients.

“Here on the Central Coast our hospitals have never been busier.

“The government can’t just be about new shiny new buildings – it’s about the people inside those buildings.