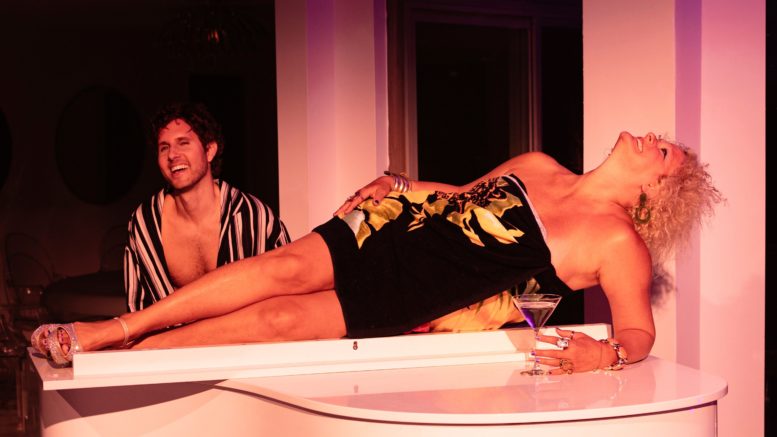 Hardys Bay restauranteur, Rupert Noffs, will be stepping back into a past life and sharing the stage with best friend and downtown Manhattan cabaret icon Amber Martin, for the Bette Milder show, BATHHOUSE BETTE, at the Naughty Noodle Fun Haus on June 26.

The award-nominated show will feature Martin playing the Broadway chorus singer who got her first headline gig singing weekend shows to men in towels at the legendary Continental Baths in NYC, with Noffs singing songs performed by Bette’s house accompanist, Barry Manilow.

Bathhouse Bette was written by Martin and pays tribute to the bawdy, sometimes naughty comedy, and beautiful music of Bette Midler in a celebration of the earliest bathhouse performances.

Noffs is the owner of The Lucky Bee in Hardys Bay and said he is excited to be reunited with Amber Martin on stage.

“[Amber] is a talent unlike any other,” Noffs said.

“She has the best comedic timing then a voice like Barbra Streisand in the 60’s plus a brash Texan attitude – take no prisoners.”

Noffs met Martin when he first moved to NYC in 2010 and lived across the famous Bar, The Lucky Strike.

“The Lucky Strike was where Moby started DJ-ing and where Madonna would hang out,” Noffs said.

“Amber was a bartender and DJ there, when Matty and I just got off the plane, literally, and walked by.

“She turned to us and flashed us her tits; It was love at first sight.

“Matty and I walked in and danced to her tracks … she’s an encyclopaedia of music.

“Like my mentor, Mark Trevorrow (Aka Bob Downe), Amber became one of my closest friends in New York, like a big sister I always wanted.”

He said he has a background in music and started when he left school and was accepted into the Conservatorium of Music and trained in Classical Performance.

“I then went onto NIDA and studied Acting, Singing and Dancing and got a job on a P&O boat in Europe.

“Since then, I’ve done a few cabaret shows in NYC and Sydney.

“Everything you do in life is an audition.”