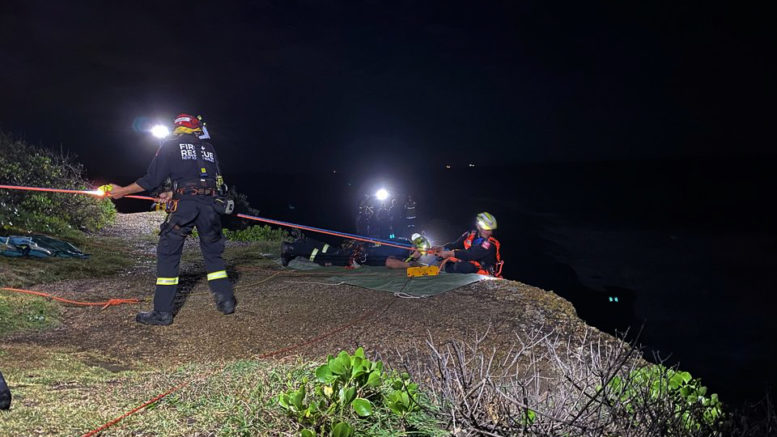 A young couple were saved from being trapped in an ocean cave in a dramatic night time vertical cliff rescue on Wednesday, May 26.

Police located the couple at 11.30pm after not being seen since 2pm at Catherine Hill Bay.

There was about one kilometre of rocky path into the cliff area above the trapped couple, where Fire and Rescue crews worked through the dark and cold to set up a rope system to send a firefighter down a sheer 20m drop off a ledge on to crashing waves and rocks, then making his way inside the cave to locate the two trapped people.

One at a time, crews physically hauled the rescue firefighter and the two people to the top of the cliff.

They were quickly assessed, given warm blankets and walked out by police officers to an awaiting ambulance.

The couple were treated by ambulance paramedics at the scene for minor cuts and scratches.

Crew members have been congratulated by the Fire and Rescue Station Manager for the long and difficult task of carrying such heavy equipment over such difficult terrain to rescue the couple.