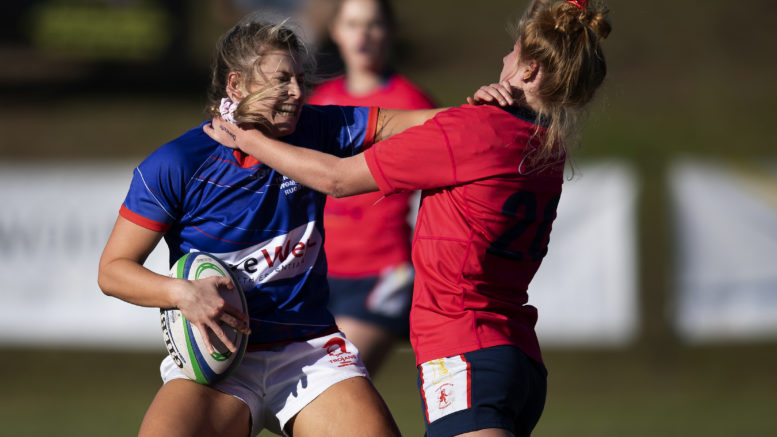 The Terrigal Trojans clash with Gosford/Woy Woy in the Women Tens, Round Nine

A win for the Terrigal Trojans and a loss for the Avoca Sharks in the Swietelsky Premier One Round Nine on Saturday, June 5, has been the crucial factor in this week’s shift in the top of the table positioning for the overall Club Championships.

Defeating the Woy Woy Lions by 37 – 15, along with wins in the Premier Two and Women Tens divisions, has launched the Trojans into the Club Championships lead.

Meanwhile, two close losses for the Sharks against the Lakes in the Premier One and Two have resulted in the club being pushed down to second place.

In the first grade clash between Terrigal and Woy Woy at The Haven Oval, a dominant second half performance for the hosts proved the difference between the two teams.

Although conceding 12 points through two tries to the current Premier One table leaders, Woy Woy showed a lot of strength in their play to bring the score back to within two points before half time and then the lead 15 -12 with an early second half try.

In response, the Trojans slowly took back control, posting a further 22 unanswered points, although it was only in the last 15 minutes the result looked clear.

For Terrigal’s Coaching Director, Craig McWilliam, the game was won in the end due to the teamwork, structure and pattern of the Trojans squad.

“Woy Woy are a very good football side, their intensity and level of contact in defence was very physical and they pushed Terrigal all the way,” he said.

“It was a very close game of football, but the team relied on their structures and repeatability to get the job done in the end.”

A further win was recorded for Terrigal in the Women Tens against Gosford/Woy Woy, finishing 17 – 12.

Terrigal dominated possession and territory in the first half, scoring two early tries and a late third for Jess Brooks, an effort earning her the player’s player accolade.

Gosford/Woy Woy responded in the second half through speed and agility, posting tries of their own to combat the lead of their hosts.

However, with large thanks to the defensive efforts of Vic Scott in the middle of the park to shut down some electric attacking opportunities from Gosford/Woy Woy, the Trojans managed to hold on.

Separately, the Avoca women pulled one more point ahead on the ladder after a convincing 30 – 5 win over The Lakes.

Despite being favourites, Avoca did not to underestimate the Lakes, who were incredibly tough defensively and forced the Sharks wide in their search for five-pointers.

In the Men’s competition, Avoca finished the day with two losses against The Lakes, first in the Premier Two, 7 – 8, then in the Premier One, 34 – 40.

The first grade match was both high-scoring and see-sawing, and it was not until the final 20 minutes that any clue was shown as to who the victor might be.

Avoca started strongly and were able to cross for two early tries, before the Lakes undid these efforts with two of their own, pushing themselves ahead by 14 – 12.

From here, the lead changed a further four times: a penalty goal put the Sharks ahead, before a second half try re-established the Lakes in front, followed by a try for Avoca, then a strong forward surge from the visitors resulting in 21 unanswered points.

With ten minutes to go, the Lakes received two yellow cards and Avoca took the opportunity to post two more tries, the last coming after the final whistle.

For Avoca’s Premier One Head Coach, Justin Staben, the great efforts of his club in the Women’s, President’s Cup and Premier Two divisions need to be matched by the Premier One team if they are to take back the Club Championship lead.

“Our first grade needs to start winning some games, everyone else is still going well and the club as a whole is strong,” Staben said.

“We’ve dug ourselves into a big hole now, so we have to get ourselves out.

“If we can be stronger – plus with a couple of guys coming back in from injury – hopefully we can turn it around, but we need to do a lot more when things don’t go our way.”