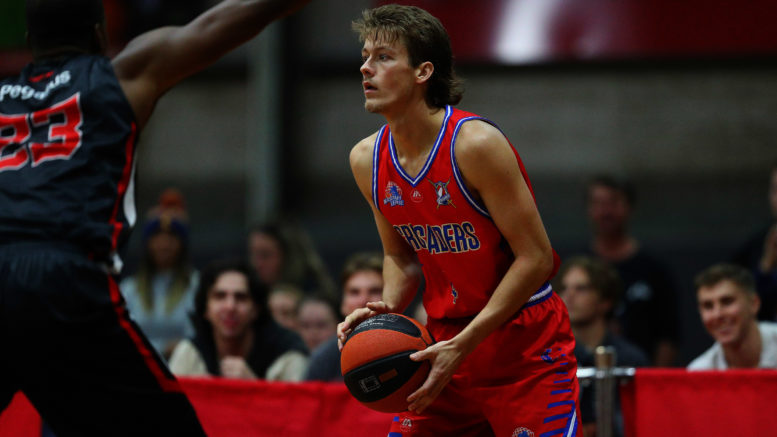 The Central Coast Crusaders play Maitland Mustangs in Round 3 of the Waratah Mens Division 1 at Breakers Stadium on 24th of April, 2021 in Terrigal, NSW Australia. (Photo by James Quigley/LookPro)

The Central Coast Crusaders have recorded their first round with straight wins in the Waratah Leagues against the Hornsby Spiders at the Brick Pit in Thornleigh, with an exceptional record being attained by Jacob Cracknell in the Open Men’s team.

Whilst the Open Women’s team rested this week for their bye, the Open Men, Youth Men and Youth Women all played some of their most proficient basketball of the season.

First up were the Youth Men who won 89 – 82 win and have nestled into second place on the ladder behind the Bankstown Bruins on score difference.

“The boys didn’t play into their (opposition’s) freestyle type of play, we kept them out of the paint and forced them to make shots they weren’t comfortable with,” said Assistant Coach, Killi Akamarmoi.

Oliver Hedger had a monster game on offense, dropping in 33 points from stellar mid and long range shooting.

Nicholas Wooller also made his presence felt, contributing 17 points, whilst captain Hammish Loader inspired the team with 13 of his own.

In the Youth Women’s game, another win was recorded for the Crusaders, the final score being 78 – 64.

“We love to play a ‘3-and-D’ type game and it’s safe to say it has worked out for us this season,” said Head Coach Will Granger.

Sara Matthews once again led the charge with a cool 19 points, knocking down a pair of threes and killing the defence on the fast break.

Abbey Cracknell started making some waves after a quiet few weeks due to injury with a couple of three pointers and a 13 point total.

The biggest result of the day however came for the Open Men who excelled on the road with their second win this season, finishing 111 – 81.

The highlight in the game was the performance of Jacob Cracknell, equalled the all-time Australian National Basketball League (NBL) record for most three-pointers in a game.

Overall, Cracknell sunk 13 balls from outside the three-point line, contributing to his grand total of 46 points.

James Trustum also scored a solid 21, helping propel the Crusaders to a massive 30 point win on the night.

“Our veteran Tye McGann got us going, drawing in defenders on the inside and making the right passes to the outside,” said Head Coach Jared Scoines.

These three big wins have come at an advantageous time for the Crusader teams who will now head into a Round Ten double-header match-up after a week off for the June long weekend.

On Saturday, June 19, these same three Crusader teams will face the Sydney Comets at Breakers Indoor Sports Stadium, followed by a Sunday match against the Penrith Panthers at Penrith Valley Regional Sports Centre.

Meanwhile, the Open Women have another bye week before their own double-header weekend from Saturday to Sunday, June 26-7, against the North Bears then the Manly Warringah Sea Eagles.