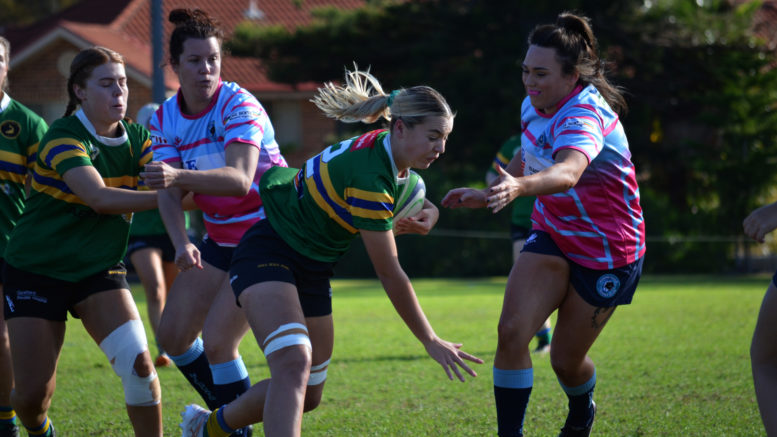 It was four out of four wins for the Avoca Sharks on Saturday, May 22, at Heazlett Park, solidifying their number one position in three out of the four divisions and on the overall Club Championships points tally.

The first win on this Round Seven game day came for the President’s Cup side against Terrigal White, finishing 22 – 19 and lifting them 11 points clear of The Lakes in second place on the table.

Following this was a very convincing 47 – 0 win over the Warnervale Cats for the Premier Two team to go five points clear of, again, The Lakes in second place, who still have a game in hand.

For the Women Tens team, who also faced Warnervale, their 26 – 17 win was hard fought in the face of heavy defence and has pushed them eight points clear of second place Terrigal, who also have a game in hand.

Warnervale controlled the game early, running lines close to the ruck and making good use of their power forwards, Kian Darragh and Georgia Opetaia.

However, the smaller Avoca tight-five were able to match them and managed better transitions to their back line.

Avoca benefitted from the return of Ash “the Flash” Russell, who crossed the try line three times, well supported by some hard, straight running from Priya Lama and Taylah Welsh.

Warnervale often dominated at the breakdown with persistent turnovers coming from the Skipper, Dannielle Theron, which led to some broken phase tries for Nicole Hill, Tia Duncan and Terina Haami.

The second half was dominated by massive hits from both teams, especially from Sharks’ Captain Hannah Stewart and Warnervale Front Row Queen, Allanah Selwyn.

In the end, the Sharks managed to hold on to their lead, although the Cats went away with justifiable hopes of contending for ultimate victory in 2021.

The captain of the Wildcats, Danielle Theron, said it was “a game you had to witness to believe”, a sentiment back up by Cameron Stewart, club secretary and Women Tens Coach.

“A number of spectators commented that is was the best game of the day which is a real complement,” said Stewart.

“It was a very physical game and it just shows how much the girls have developed.

“Over the past two years, the competition has become very good and the skill levels have gone through the roof, especially in terms of defence, and this was a heavy defence game with both sides putting some heavy hits on each other.

In the Swietelsky Premier One game between Avoca and Warnervale, the Sharks triumphed by 23 – 13.

It was a tough encounter for Avoca who benefitted from setting and holding an early lead.

A second half converted try gave to Warnervale a chance at a comeback, but through scoring another try and holding their defence well, Avoca managed to stay in front.

Although there are plenty of match days still to be played, all four Avoca teams have shown themselves to be strong in the race for their respective titles come season end.

[and CCN sincerely apologises to the Sharks for our error last week.]