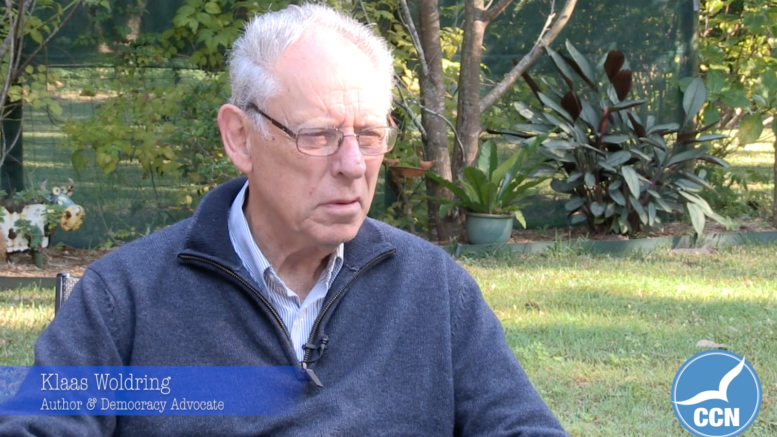 Local democracy activist, Klaas Woldring, has shared his submission to the Public Inquiry into council with Central Coast Newspapers, revealing a scathing analysis into how undemocratic the whole process of amalgamation has been.

He said he wanted to remind citizens that they are living in a democracy and it ‘wouldn’t hurt to remind our representatives of that reality’.

Here is what Klaas had to say in his submission to the inquiry:

I refer specifically to item 3 of the arguments (in ‘Constitutional referendum on councillor and ward numbers to be held in 2021’) as to why we should have this Referendum. Clearly this is not a democratic decision at all.

I want to make a submission as a ratepayer for the last 21 years in Pearl Beach. My answer is: This is not the Referendum we need to have.

First of all, we need a Referendum in September about whether or not the Central Coast voters want to continue with the enforced amalgamation, a shocking undemocratic imposition.

That is what democracy is about. So, there should really be two referendums questions at the same time: First, if voters want to continue with an amalgamated Council at all; YES or NO.

Secondly, should the majority decide YES, what would be their preference in respect of the second issue?

Conceivably, a third question could be put: Are the citizens in favour of creating a Regional Organisation of Councils (ROC)? That certainly would make more sense.

What is the Public Interest and how is it related Democracy?

A very important question: My answer is Public Interest is generated by effective democracy. Democracy, in practice, Indirect Democracy in large scale national societies, is or should be effectively generated by the representatives of the people.

Although distinct from Direct Democracy, which can be exercised by a small group of people as in clubs and in small local governments, the principle is the same. The majority of the representatives decide what their joint interest is. None other.

My knowledge of the amazing shortfall of funds, over half a billion dollars, of the newly amalgamated Central Coast Council, is limited to what we have read in the local papers of the last few months.  The Inquiry by the then Administrator Dick Persson seems to me quite revealing – he said essentially ‘budget bungling’ by Council administrators.

The elected Council seems to have become aware of this only in late October 2020. So, would a further Inquiry by the Local Government Minister, tell us much more? It seems unlikely. Should that take up another year? Why?

In terms of Democracy the question that I would like to have answered: Why were the citizens of the Central Coast not asked at all if they favoured amalgamation?

It may well be correct, as Persson reported, that the financial debacle was not the result of the imposed amalgamation. This is quite possible. It is a separate issue really, and not really relevant here.

However, why was amalgamation imposed?

Why should the citizens have to put up with a very large Council area, without having our say in this? The Council area is ridiculously large. This totally detracts from effective, democratic local government.

For local government to be meaningful democratically, citizens need to be fairly close to one another and to their Council, if possible. They should still have their say about this. That is what democracy is about and what was clearly denied by the NSW government. That could still be done. It would hardly involve extra expense.

The idea of now continuing and improving the amalgamated council or not, or go back to the status quo (two separate Councils) should be up to the citizens. Effective local government surely is the foundation stone of a true representative democracy.

What we have now is PSEUDO DEMOCRACY, a pretend democracy in the form of a nonsensical proposition which completely ignores that fundamental mistake has been made by the NSW Government in the first place!

It is disturbing also that the submissions made to this Inquiry are not publicly available.

It is up to the Commissioner to decide if submissions are to made publicly available. Again, most undemocratic! I want the citizens to see this submission and I also want to see what others have submitted. This control over the citizens’ views is plainly wrong. It is further evidence of a pretend democratic system.

It also seems to me that the expense of this exercise should be borne by the State Government.

The State Government has created this situation. Local government is the responsibility of the State Government. Amazingly, a Special Fund was actually created by the State Government to assist with these amalgamations, but it was later decided to cancel the process as several amalgamated Councils protested and, apparently, some started costly court proceedings. The remainder of that Fund was distributed in an exercise of pork barrelling, according to the Greens MP David Shoebridge. Some 95% of the around $250.000.000 was handed out to Liberal seats or marginal seats, a largesse that is made possible by Australia’s Single Member District electoral system.

Some of that money should be allocated to amalgamated Councils in trouble. This certainly is NOT a democratic way to distribute such earmarked funds at all.  Yes, the Premier may well say “every political party is doing it” but how about we start talking about a superior electoral system to improve our democratic system: Proportional Representation – Party List used in 89 countries in the world. You can read all about that in my recent book ‘How to improve Australia’s Democracy’, BookPod, 2020.

Democracy is struggling in Australia and in several other countries as well. Contrary to the usual claims by politicians that “this is a democracy” it is far from perfect here. It is up to the citizens to insist on its values and processes. This is an opportunity to insist on due democratic process to promote the public interest.

I have heard that “Harmonising” was a justification for amalgamation. If that means achieving equality of rates’ income between Wyong and Gosford it seems odd. Harmonising of income and wealth in Australia make perfect sense as the rapidly growing inequality between classes of citizens is also a clear threat to democracy and the supposedly egalitarian society.

There are much better ways to do that than creating giant Local Councils: progressive income taxation, wealth taxes, abolishing negative gearing, much stricter limitations on donating to political parties, and proportional representation based on multi- member electoral districts.

The model that should be followed on the Central Coast is a Regional Council that comprises two or more Local Councils (ROCs). The regional organisation of councils has been is use for several years now. There are several highly successful ROCs.  Information on the Internet explains it. You are no doubt very well aware of this.

Mr Waldring has published several books on democracy, his most recent being ‘How to improve Australia’s Democracy‘ .