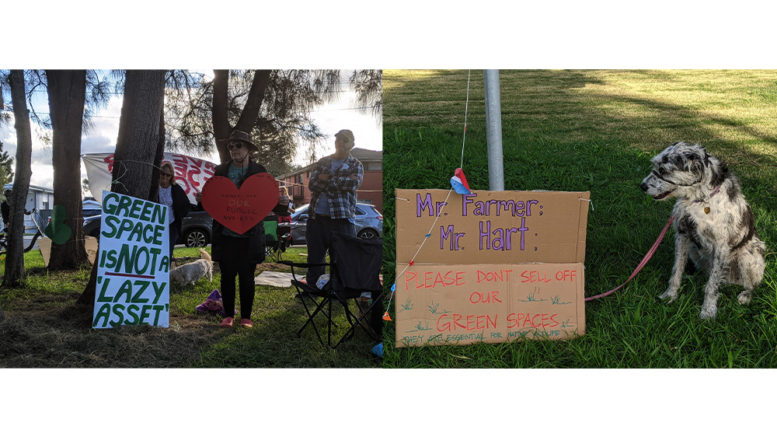 Local environment groups and scores of people turned out for the third community protest rally held on the Coast, this time at The Entrance on Sunday, May 23.

With only days left before public feedback closes, the community is being urged to protest against Central Coast Council’s sell-off of green spaces and community land.

The event was at 10 Lakeside Pde, one of six public green spaces in the current bundle of assets, Tranche 3, which Council wants to sell to help fix its dire financial situation.

At least two of the six public reserves for sale have been described by Council as “heavily forested” and comprising habitat and food trees for local native wildlife.

The rally, hosted by Community Environmental Alliance (CEA), was also attended by members of Save Central Coast Reserves (SCCR).

Spokesperson for SCCR, Sue Chidgey, spoke about her long standing efforts to save reserves on the Coast over many years.

“It’s disappointing to find ourselves in this position yet again, having to fight our own Council to be heard, and fighting to have our well utilised and ecologically critical green spaces preserved and not developed,” she said.

CEA spokesperson, Harvest Beaumont, said that while they recognised that Council needed to sell some surplus assets at this time, they absolutely did not accept that the community’s public reserves and playgrounds should be included in the sales.

“Small pockets of so called vacant land, which are currently vegetated, provide shade, food and water sources, and are landing/roosting sites and safe corridors for a surprising amount of native wildlife,” he said.

“It’s our community that will lose out as well, as these reserves are well utilised by the public,” Beaumont said.

Founder of CEA, Jake Cassar, said it was disheartening to see Council branding areas used by the community, including the voiceless native animals, as “lazy assets”.

“We need a forward thinking Council that not only sees the social and environmental benefits of having green spaces, but the economic value as well.

“We have some of the most ecologically and culturally diverse land spaces within any single local government area in Australia.

“We want to see those spaces shine and be recognised for the unique places they are, not simply bulldozed and developed into oblivion,” Cassar said.

The Entrance MP, David Mehan, told the rally that he supported the community’s stance.

“Community land belongs to the community and should not be included in any of the lists of land for sale,” he said.

Community members have until 5pm on Friday, May 28, to lodge a submission protesting the community land sales.

A survey is online at yourvoiceourcoast.com