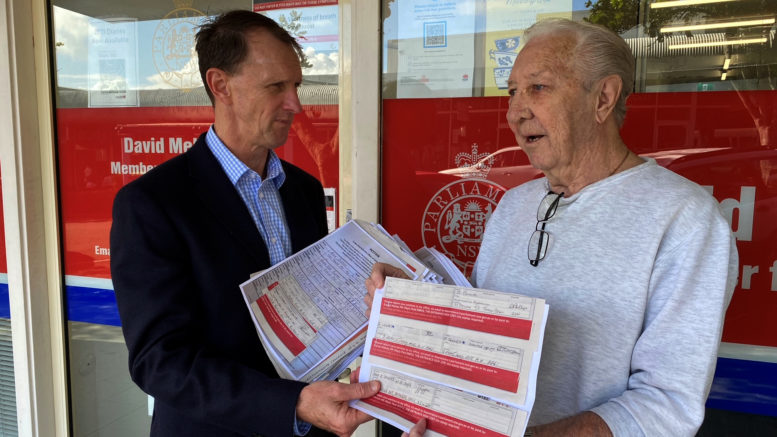 The Entrance MP, David Mehan, receives one of many petitions opposing the closure of the local library from community member, Brian Tighe

Revelations that Central Coast Council has received increased library funding from the NSW Government have sparked renewed calls from The Entrance MP, David Mehan, to keep the local library open.

Mehan said Council had benefitted from increased library funding since 2018 and further increases were scheduled up to 2023.

In 2018, the State Government announced a four-year funding package for NSW public libraries with a steady increase up to 54 percent per capita subsidy payments by 2022/23 for all councils in the state.

“With the certainty of increased funding already locked in, I am surprised that library services for my constituents in The Entrance electorate are still being cut,” Mehan said.

“Council needs to review its decision to close The Entrance library or explain why it is cutting services, even though it has received more funds for those services.”

At Council’s meeting on May 11, Mehan’s Senior Electorate Officer, Catherine Wall, handed over a petition with 1,106 signatures calling for The Entrance library to remain open.

“The library is a communication hub, not only for library services but for Council services …. to register your dog, browse the internet, apply for a job, view Council plans, attend a book club or even learn how to knit,” Wall said in the Open Forum.

“Council’s proposal of a mobile library set up at The Entrance every Thursday from 1pm, along with the possibility of relocating two public access PCs to the Visitor Information Centre is just not an acceptable alternative.

“Recently, The Entrance cinema sadly shut its doors, the Commonwealth Bank finally admitted to following Westpac’s lead in permanently closing its branch, and on June 3, they will remove their regularly used ATM.

“Interestingly, both the banks and Council are using the same line that the community can conveniently access their services less than five kilometres away at Bateau Bay.

“This is not at all helpful to the many who are less mobile or socially disadvantaged living in The Entrance.

“To say the community is unhappy about the library closing would be an understatement,” Wall said.

In response to Wall, the then Administrator, Dick Persson, said the financial situation that the Council ended up in had left him, and the then Acting CEO, Rik Hart, with some very hard decisions that involved reducing staff numbers.

Persson said at the time “there’s a hell of a lot of nasty cuts” but he would ask the new Administrator, Rik Hart, to put it on his list of considerations as one of the things that should remain and “we’ll see how the budget continues to travel”, Persson said.

Another community petition with about 1400 signatures, organised by Jacqueline Austin, has also been presented to Council.

Mehan is urging all the community to have their say about the closure of the library by making a submission to Council’s draft Operational Plan 2021/22 before it closes at 5pm on Wednesday, May 26.

Submissions can be made online at yourvoiceourcoast.com

Why the secrecy over the Council loan lender?