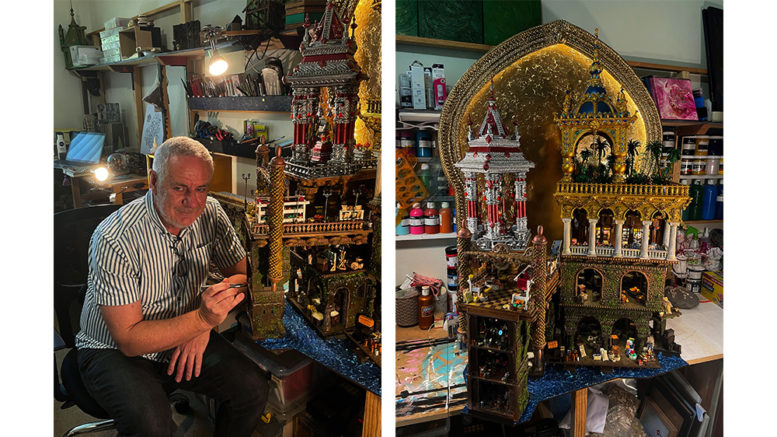 Daryl Kirkness puts the finishing touches to one of his pieces

Daryl Kirkness of Wyoming began building models for stage sets when he was still in high school.

Now, more than 40 years later, his art has evolved into the creation of stunning three-dimensional works, with an exhibition of the very best of them set to open at Tuggerah’s Red Tree Theatre gallery on May 18.

More than 40 pieces will be on display in the Little Worlds exhibit – miniature worlds created with painstaking attention to detail and each taking hundreds of hours to complete.

“I built my first stage set model in 1976 for a Gosford Musical Society (GMS) production of A Funny Thing Happened on the Way to the Forum at the request of the director, to help the builders in visualising the final concept,” he said.

“I then began making models for sets for GMS productions as a regular thing, and later for The Entrance Theatre Company and other groups on the Coast.

“As I improved as an artist, the models became more detailed and over the years I have built more than 150 set models for various productions, in a variety of spaces.”

Kirkness was brought up with a keen interest in theatre.

“His father, Bruce Kirkness, was for many years the chief set builder for GMS and Kirkness recalls working on set pieces with his father at their home from an early age.

The love of theatre grew, with Kirkness becoming an accomplished actor, director and set designer, designing many sets for GMS and other groups over the years.

Many of the set models made for these productions have been gifted to show participants – some have even been destroyed.

It was in 2000, as he was recuperating from a serious accident, that Kirkness expanded his art to embrace pieces not associated with theatrical productions.

“I started to craft my model Turris Vitae: The Tower of Life during that time,” he said.

“While it is still not completed and never may be, its creation led me to engage with this new art form in depth.”

Since then Kirkness has created a vast array of 3D artworks.

“People don’t quite know where this area of creativity sits,” he said.

“It embraces several art forms including painting and sculpture, metalwork and work with clay.

“I have used the art to work my way through dark periods in my life, including deep depression, and some of the pieces are very personal.”

Kirkness offers no explanation for the pieces beyond their titles, preferring people to use their imaginations to invent inhabitants and their stories as they examine the intricate models.

“This is my way of storytelling,” he said.

“Some people write books – I create small worlds which people can interpret.”

One of Kirkness’s pieces, the Wizard’s Lair, has been used in schools where students wrote their own stories based on the presented environment.

Kirkness uses items that have been found, remade or bought new to create the miniature worlds, many of which express deep themes and political or social commentary.

One such piece is The Two Towers, which is a comment on capitalism.

“It facscinates me when people look at my pieces and are inspired to create their own stories and I am really interested in hearing how they interpret the works,”” he said.

Kirkness’s Little Worlds exhibition opens at the Red Tree Theatre gallery on May 19 and will be on exhibit for a month, with most of the pieces on show for sale.

Also, on display until June 19, along with the 40 major pieces, will be 15 smaller pieces, 40 drawn works, canvases and wall works.

Visually impaired would be lost without their seeing-eye dog