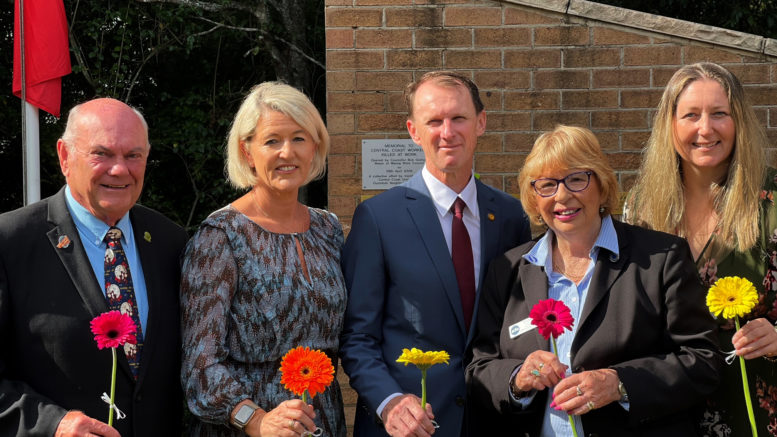 International Workers Memorial Day is a worldwide day to remember and mourn those killed, disabled or injured at work, and to promote safer working environments, and it is observed annually on April 28.

To commemorate the day on the Coast, a service was held at the Ourimbah Wall of Remembrance, and was attended by the families and friends of Central Coast workers who have lost their lives at, or as a result of, their work.

Attending the service was Deputy Labor Leader, Yasmin Catley, as well as representatives from SafeWork NSW and former Wyong Mayor, Bob Graham, who officially opened the memorial in 2006.

Member for The Entrance, David Mehan, was also in attendance at the service.

Speakers at the event also included Member for Dobell, Emma McBride, and Vice President of the Asbestos Disease Foundation of Australia, Maree Stokes.

Stokes, a resident on the Coast, spoke about her husband who passed away in 2003 from asbestos exposure from his time working as a panel beater.

“It is important to acknowledge and use this time to remember the significance of a safe and healthy workplace and to reflect on the unfortunate circumstances which take place at work that contribute to these tragedies,” said Mehan.

“The service allows Central Coast people who have lost a friend or family member an opportunity to remember that person who has been taken from them in tragic circumstances and with little or no warning,” said Mehan.

“I am always pleased to host this event in my electorate, Central Coast people who have lost a loved one because of work are welcome to have that person’s name recorded on this wall to honour their work and remind us of the loss to our community and can contact my office for this to be arranged,” said Mehan.

Health and Safety is a fundamental workers’ right, is the theme of this year’s Workers’ Memorial Day, set by The International Trade Union Confederation.

According to Safe Work Australia, the number of work related fatalities has been steadily decreasing over the last decade, and raising awareness of work, health and safety issues and by taking actions to eliminate or minimise health and safety risks in the workplace, it can help further reduce the number of future work related injuries and deaths.

There have currently been 29 workplace fatalities this year, with 11 of those deaths occurring in the transport, postal and warehousing industry.

Four deaths have been recorded in the construction industry, and three in the agriculture industry.