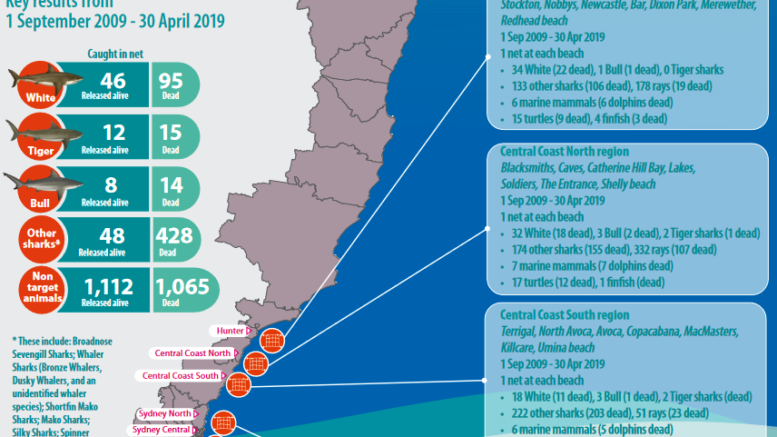 Calls for the removal of shark nets at Umina and Killcare beaches have been made following concerns the nets provide ‘a false sense of security’.

Since the launch of its trial on September 1, 2009, the NSW Department of Primary Industries has been recording its findings of their shark nets program.

According to the Department’s data, 217 sharks have died on the Southern end of the Coast between 2009 and April 2019 as a result of the nets.

And, according to a media release from the Humane Society International Australia (HSI), nearly 400 non-target animals have also been ‘killed’ on Central Coast beaches since 2012 as a direct result of the 11 shark nets currently in use.

The HSI also states that 40% of sharks have been caught on the beach side of the nets, essentially referring to its lack of effectiveness.

Lawrence Chlebeck, a Marine Biologist for HSI said the shark nets provide nothing but a ‘false sense of security’ for swimmers.

“What a lot of people might not realise is that the nets are not complete barriers, they are only about 150 meters long and six meters high and sharks swim over and around them,” Chlebeck said.

“The technology is nearly 100-years-old, we would never accept safety technology that old in any other facet of our lives, why should ocean safety be any different?

“It is in everyone’s best interest that the current Shark Meshing Program is done away with.

“[We are] pleased to see that attitude being reflected at the local council level and we hope to see the Central Coast make the same decision.”

The Australian Marine Conservation Society scientist said he would like to see a transition to more modern solutions.

“We’ve got modern solutions to beach safety like drones that don’t drown our iconic wildlife, can spot sharks in advance, and have a big added bonus of spotting people at risk of drowning – the biggest danger at our beaches,” Guida said.

In the Department of Primary Industries own infographic, there seems to be a public support for getting rid of shark nets.

The Department acknowledges public concerns that it is ‘commonly viewed as old and outdated technology’ which is the ‘least liked shark mitigation method due to socially unacceptable levels of bycatch/mortality’.

The Department also recognises the community would prefer non-lethal shark mitigation approaches that minimise harm to sharks and other species, but that some people report feeling safer in the water with the nets deployed.

The HSI is currently leading a joint campaign with the Australian Marine Conservation Society to push for this change on the Central Coast.

This follows the recent revoking of support from other NSW local councils in the continued use of shark nets.

Councils involved in the annulling of the net program include the Northern Beaches, Newcastle, Wollongong, Randwick and Waverley.

Each Council passed motions submitting to the NSW Department of Primary Industries that they would like to transition to more ‘modern’ solutions that improve swimmer safety and reduce wildlife deaths.