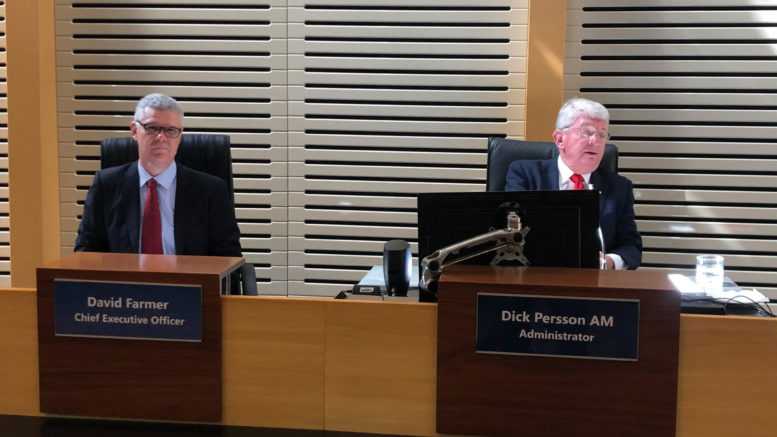 Local Government Minister, Shelley Hancock, announced on April 27 that a public inquiry will be held, with councillors remaining suspended and the local government elections slated for September 4 postponed until late next year.

While the move has been applauded by Administrator Dick Persson and Parliamentary Secretary for the Central Coast Adam Crouch, not everyone is pleased.

Suspended Mayor Lisa Matthews said a public inquiry isn’t the answer ratepayers have been looking for and Shadow Minister for the Central Coast, David Harris, said he was disappointed that calls for a judicial inquiry, supported by an e-petition bearing more than 20,000 signatures, had been ignored.

Council Administrator, Dick Persson, said the Minister’s decision to stop the suspended councillors returning on April 29 was “great news for both the community and the Council”.

He also applauded the appointment of Rik Hart as the new Administrator, saying it would ensure continuity “in regard to the reform process well underway”.

In a subsequent media interview Minister Hancock said the inquiry may take 12 months or more and, in explaining her preference for a public inquiry, said “public interest comes before democracy”.

“It’s not from some elite group (or) a Communist system where the top decides what is good for the people.

“We see a decline in democracy in several western countries and also other countries, and I think it is up to the people to stop this decline and to say we do not agree.

“This is an opportunity to insist on the democratic process to establish the public interest.

“What I would have liked to see was, at the next Council elections in September, this matter being put to the citizens of the Central Coast in a referendum where they can have their say, something they should have had in the first place.”

Woldring said the citizens of the Central Coast should have been asked if they favoured an amalgamation.

“It may well be correct, as Persson reported, that the financial debacle was not the result of the imposed amalgamation; however, why did we have this amalgamation and who is responsible?

“The people have not been asked if they wanted amalgamation, and I think in terms of democracy, the first thing you would do is go to the people and say ‘we would like to combine these two councils for certain reasons and what do you think about it, yes or no’.

Woldring said expenses caused by the amalgamation should be borne by the State Government.

“I have heard that ‘harmonising’ was a justification for amalgamation,” he said.

“If that means achieving equality of income and wealth between Wyong and Gosford, it seems odd.

“There are much better ways to do that than creating giant local councils: progressive income taxation, wealth taxes, abolishing negative gearing, much stricter limitations on donating to political parties, and proportional representation based on multi-member electoral districts.”