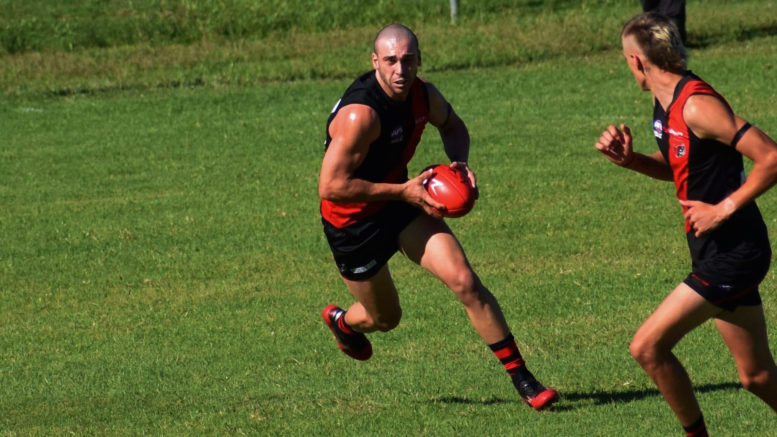 Two wins for the Killarney Vale Bombers in the Men’s and Women’s Black Diamond Cup have positively shaped their standing on their respective league tables, with important Central Coast derby matches coming up next weekend.

For the Men’s team, a crushing win over Singleton finished 28 – 120, 4 goals against 18, to bring them into the lead on the table with 16 points, level with Terrigal Avoca, who they will play next round.

The Women also had a win over Wyong Lakes to overtake them in third place on the table, due to goal scoring percentage.

For Corey Shackleton, Coach of the first grade Men’s team, the win that has kept the team undefeated this season is a great way to lead into a very important derby match against Terrigal Avoca.

“Singleton for us have been a bit of a bogey side over the past couple of years,” said Shackleton.

“Two years ago, they knocked us out of the semi-finals and last year they beat us by a point in a game that shaped our season a bit.

“We haven’t beaten them for a couple of years, so it was good to go up there and get the win.

“We’ve got a group that’s been together now for two years, with some new players in the side who have really boosted our depth.

“We’re starting to settle on a playing style that’s suiting the list we’ve got.

“We’re playing a real open running style of football which is utilising our younger players, so we’re using our speed a lot and, as a young side, trying to stay in the contest early in the game and then run over sides with our fitness at the end.

“It’s worked for us so far, but it will be a big test against Terrigal Avoca to see how it works against pretty good opposition.

“We’ll go there and throw everything at them to set a benchmark.

“We want to know where we sit against the best team in the comp.

“They are traditionally a really good defensive side and really well structured, so we’ve got to find a way to score points, so hopefully our running game can open them up.

For the Women’s first grade side, it was a much closer battle to come away with the win over Wyong Lakes, end score 33 – 55.

Women’s Coach, Micheal Smith, drew attention to the physical nature of the match that kept the game even throughout the first half.

“When we play Wyong, it’s always a physical encounter due to the rivalry,” he said.

“In the first quarter, we sustained two injuries and unfortunately they didn’t return, so we had no bench for the rest of the game.

“Up until the third quarter, it was a see-sawing battle, then we kicked a couple of goals in a row which we needed to get to that final margin.

The Women will also play Terrigal Avoca this weekend.

Both sides, as well as Wyong Lakes and Lake Macquarie, are now positioned on 8 points, with Cardiff and Newcastle City well ahead on 20 and 16.

Nonetheless, the results from this weekend will greatly influence the mid-table battle to make it into the finals for a shot at upsetting the two league leaders.

Magpies seniors have a difficult round

Daniel Lloyd to play for Giants in AFL grand final