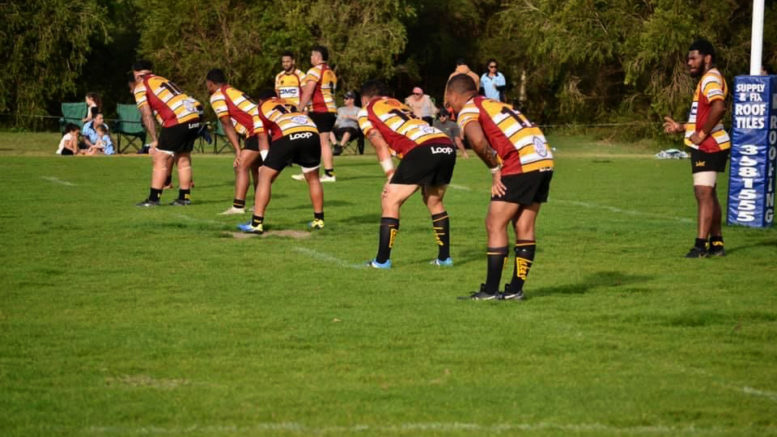 The inaugural Moroney Acreman Cup was played between the northern Central Coast derby teams, Warnervale and The Lakes, on Saturday, May 8, at Woongarrah Oval, with the newly established competition going the way of The Lakes.

The Lakes finished with a 14 point lead over their closest competitors in this first edition of a Cup play-off internal to the Swietelsky Premier One league, end score 21 – 7.

The Lakes established their lead early in the game with three unanswered and converted tries in the first half, a testing lead over the team still waiting for their opening season win in Premier One.

Warnervale came back with a strong effort in the second half, securing their first seven pointer soon after the recommencement of play.

The try was followed by an unfortunate turn as one of The Lakes’ front rowers suffered a neck injury during a scrum.

The game was halted while everyone awaited the arrival of an ambulance to take the player to hospital.

Once this was taken care of, the light of day was waning and it was decided that the game would be concluded early.

According to The Lakes’ first grade coach, Marshall Hemopo, the prop has not been seriously injured and is recovering well, despite having a stiff neck and a dislocated shoulder.

Nonetheless, his team walked away with the Moroney Acreman Cup, a creation by the two club presidents, Scott Moroney of The Lakes and Chris Acreman of Warnervale, to celebrate the friendly rivalry between these two northernmost teams.

Hemopo was happy to have led his team to the first win in the Moroney Acreman Cup, even though under unfortunate circumstances.

“We went back to the after match and were presented with the Cup with the Moroney and Acreman families there in attendance,” he said.

“We are very proud to be holding it first up and are looking forward to contesting for it again in the next game.

“We host Warnervale in around eight weeks’ time, so fingers crossed we can keep the Cup in our trophy cabinet for the year.”

The best players for The Lakes were Flanker Sean Anlezark, Fly-Half Brayden Hutchinson-Walters and No.8 Peni Rauluni.

For Warnervale, it was Prop Ketoni Toutai who scored their try and Fly-Half Matthew Hurley who continued to direct very well for his team.

The Lakes can now look forward to a bye week as they prepare for three difficult games against teams above them on the ladder: Kariong, Hornsby and Avoca.

“It will be good to rest a few weary bodies after an intense start to the season, but we will take our time and then regroup heading into Kariong which will be a massive test,” continued Hemopo.

“We need a bit more patience in our play still.

“We know we have plenty of points in us but we’re trying too hard to chase them right now and we’re not working hard enough for them.

“We need more discipline in our defence as well.”

The Lakes’ Women Tens side were not as lucky against Warnervale, falling to them 20 – 5, but the Premier Two and Presidents Cup teams from The Lakes were both able to come away with strong wins, the latter playing instead against Terrigal.

Elsewhere on the Coast in Round Five, Terrigal came back from a two-week bye to overcome Avoca Beach 34 – 15 and establish their lead on the Premier One table.

This was possible due to Kariong losing to Hornsby, a result that has brought the top four teams: Terrigal, Kariong, Ourimbah and Hornsby, to within three points of each other.

With five rounds in 2021 now accounted for, the league is tightening up among the top six teams with Avoca and The Lakes both on nine points, only three points below fourth place Hornsby.

Terrigal moves to top of ladder