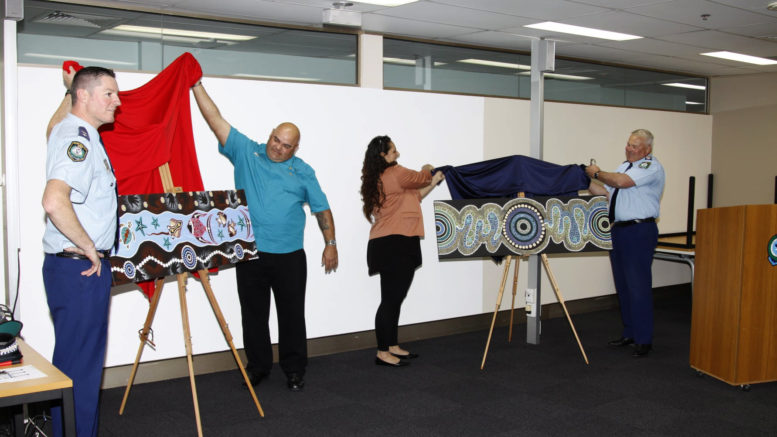 A local artist and aboriginal education officer from Brisbane Water Secondary College Umina has had his artwork unveiled in the foyer of Gosford Police Station on Tuesday, April 20.

Maurice Goolagong, along with Kylie Cassidy, presented their artworks which aimed to demonstrate the building of positive relationships between the police and local Darkinjung people.

Goolagong said the inspiration behind his painting was to tell a story around Gosford police and the community, and what this partnership represents.

“I always feel proud and happy whenever I see my artwork hanging or painted on a wall around the Coast community,” Goolagong said.

“I think it’s very important that Gosford Police and the Aboriginal community are working together to have a better understanding of each other.

“And to have the Aboriginal flag raised every morning outside the station is a small step in working together with both parties.”

The unveiling of the artwork followed an inaugural raising of the Aboriginal flag ceremony at the Mann St station.

Kevin Duncan, on behalf of the Darkinjung people, performed the ‘Welcome to Country’ and smoking ceremony as the flag was raised.

BJ Duncan on behalf of the consultative committee also spoke on the meaning of the flag to the local community.

Union Jack should not be on the Australian flag

Artworks and messages of support from young community members wanted

Send back the Union Jack

Times have changed and so should we