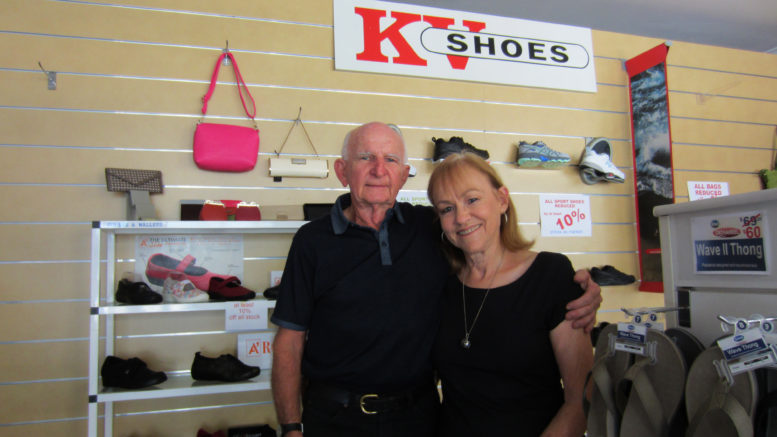 After 43 years of selling shoes, at first in Killarney Vale and then Toukley, Bill and Sue Barrett have decided to retire.

KV Shoes at Toukley, which has served three generations of family footwear, will close, but another of their stores at Morisset, which is operated by their son Jason, will continue the family tradition.

Bill made a career change 43 years ago after working in a bank for a long time and decided he needed a change.

“At the time we had two small children and Sue suggested to open a shoe shop as children’s shoes were quite hard to come by on the Central Coast,” he said.

“It was a huge risky venture for us.

“There were only a few other independent shoe shops on the Central Coast so we decided to open at Killarney Vale.

“We knew nothing about shoes so this was a new learning experience for us and we chose to open as a family footwear shop.”

Sue can still remember her first sale as a pair of black patent “first walkers” for a young child.

“Sales were slow at first but as the word spread the business got better and better and a year or so later, we opened the second shop at Toukley,” Bill said.

The Barretts opened the Toukley shop in January 1980 and it was originally known as Gemini Shoes.

“Both shops were successful, especially in school shoes, and to this day we still get people in their 40s and 50s commenting about how they still remember being fitted with school shoes by us,” Bill said.

“We had been at Killarney Vale for 17 years when the Bay Village Shopping Centre asked us to open a shop in their complex.

They made the move from Killarney Vale to Bateau Bay, their son Jason joined the business, and the Toukley shop was renamed KV Shoes to fit in with the other shop.

“We were at Bateau Bay for about 10 years when Jason decided to open his own shop at Morisset, where he still is today, and we used the opportunity to just operate the shops at Toukley and Morisset, after a short stint at The Entrance,” Bill said.

“It has been a wonderful experience to have remained a successful small busines for so long and we thank our many loyal clients who have kept coming back year after year.

“We have worked with a lot of staff members over the years who have all contributed to the success of the enterprise and we thank our recent long term staff members, Maureen and Linda, and especially Joyce Gartside, who had been with us for nearly 30 years and was well liked by everyone due to her friendly and helpful attitude.

“I can only remember Bill having one sick day off in all those years and up until Covid, the shop had only closed for business one Saturday morning when the June floods prevented him from getting to the shop, but not through lack of trying,” Sue said.

Bill said it had been a wonderful business to be in and had changed dramatically over the years, it no longer sells children’s shoes for instance.

“Our older age customers have especially made it all worthwhile with all their stories to tell and their great attitude to life and even many with poor health have a great sense of humour,” he said.

“We have had so many loyal customers who are going to be very disappointed that KV Shoes is going, but it’s time to say goodbye.

“To all our loyal customers both past and present, we say a big thank you, we have enjoyed being of service to you all and you will be sadly missed,” Bill said.