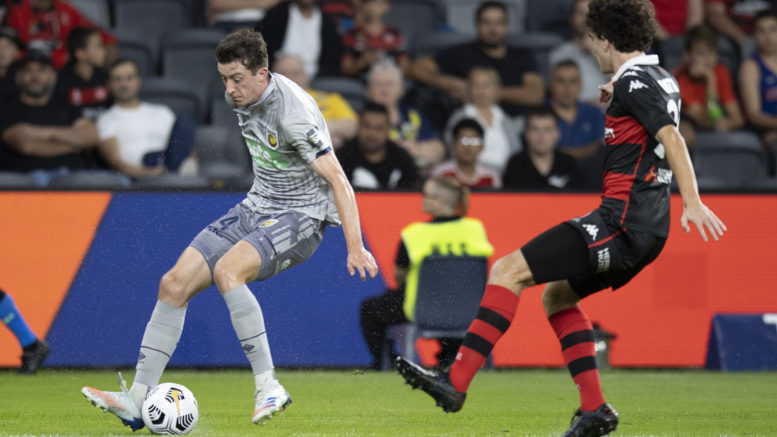 An intense match up at Bankwest Stadium between the Western Sydney Warriors and Central Coast Mariners has ended in a 2 – 2 draw after an ebb and flow contest with very few quiet moments. The game brought to Ruon Tongyik his 50th appearance in the A-League and his 25th for the Mariners, an occasion the defender met with an emboldened display in protecting his team’s goal from the strong attacks of Nikolai Muller and Mitch Duke.

For Duke, along with Bernie Ibini, the game was a chance to catch up with the team they had won the 2013 A-League Grand Final with, along with Oliver Bozanic, who has stayed true to his yellow heart. However, the team the Wanderers met this night were a very different squad from the ones they had lost to only once in their last 10 matches, with the Mariners continuing their struggle to deny Melbourne City the lead on the ladder.

From the start, the home team were faced with the composed, wide passing play of their visitors who maintained the majority of possession and initiated early intimidations on route to goal. With the home fan base to back them up, the Wanderers entered the second ten minutes with a push back against the Mariners to undo their early dominance, began by Muller’s opening shot on target at the end of a suite of attacks.

Yet the momentum broke with the now familiar combination between Marcos Ureña and Matt Simon that ended in the opening goal for the Mariners in the 22nd minute. The diagonal run into the attacking third by Ureña was well matched by De Silva, who moved with great pace to open up the through ball option across goal.

The Wanderers defence worked to intercept this passing lane, with ex-Mariner Ziggy Gordon losing sight of Simon in doing so. Ureña took this opportunity to find his fellow front man slipped in with the Wanderers defensive line and the experienced striker slipped the ball over goalkeeper, Daniel Margush, who rushed up too quickly hoping to cut down the space.

With a touch of both good fortune and the bottom side of the crossbar, Simon’s ball found its way to the back of the net and he celebrated his seventh goal this season with a recognisable shaka hand signal held high above his head.

With this goal, the momentum started to turn back in the favour of the Mariners, who held off their lead to half time despite a final chance coming to James Troisi being well met by Mariners keeper, Mark Birighitti.

The Mariners entered the second half with a lot of energy transferred into their passing play and continued to hold their opposition at bay throughout the next 20 minutes.

By the 61st minute, the Wanderers were well due for a change if they were to contest the lead of their opposition.
Muller left the field for Bruce Kamau, with Duke soon after being replaced by Simon Cox. Meanwhile, the forward combination of Simon and Ureña left the field to allow Alou Kuol and Joshua Nisbet to make their way onto the field, manager Alen Stajcic clearly hoping to replicate the late success of the previous match wherein these two came together to find the winning goal.

The game was brought back into an even contest in the 74th minute with a levelling goal coming for the Wanderers. It was the substitute Kamau who did the final damage, coming at the end of an inter-passing play started by Cox in the midfield.

After a couple of passes infield, the ball was returned to Cox out wide in space and he used the opportunity to find Kamau, left open by Jack Clisby’s unsuccessful cover of the passer. With all the necessary space, the attacking substitute opened up to meet the ball first touch and slide it past Birighitti.

A new bout of energy was then produced by the Wanderers with the fresh intention to push the ball forward into the attacking places, much similar to the tact of their opposition. Five minutes after his first goal, a second came for Kamau after a dashing run up the guts of the Mariners defensive half.

Kamau was fed the ball upfield and he met it with pace to dribble up the field to the edge of the box. A feint around Tongyik set him up to take the shot on, looking slightly unbalanced, but a fortunate deflection off Kye Rowles left Birighitti unlucky in scrambling after a slip to stop the bouncing ball from finding the bottom corner.

Now behind, the travelling Mariners fan base reach new volume levels of support to show their faith in a team who, true to their 2021 motto, have yet to back down from a challenge. On this day, the team did just enough to bring the score back to a level point.

This opportunity came after a lengthy VAR interjection deemed a foul to have been done on Kuol in the box. A high ball came down from above the Mariners sub, who raised his foot to meet it just above that of Keanu Baccus, whose studs were seen clipping the back of Kuol’s heel.

After the debacle on the penalty spot last week from Simon and Bozanic, it was the captain who again stepped to take Margush on. Making up for his mistake last week, Bozanic sold Margush the wrong way and drove the ball into the corner of the Wanderers goal.

The game did not die with this goal and a further six minutes of penalty time was announced. In this final segment of the game, both teams had the chance to win it, but neither to any success. The closest attempt cake for Wanderers player, Thomas Aquilina, who was fed the ball from Troisi’s cross and met it with his head, only to see it rebound back off the crossbar.

For the Mariners, an unsteady lead of three points maintains them on top of the A-League ladder, but with second place Melbourne City now having two games in hand on them. Nonetheless, after four games in quick succession, the Mariners will have 11 days to rest and prepare for their next match up away against Western United on April 17.