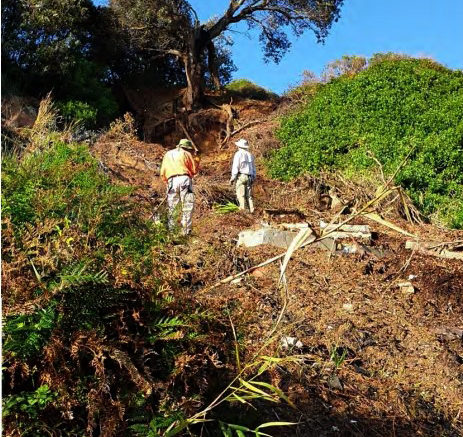 Coastcare volunteers at Norah Head Lighthouse Reserve have a challenge on their hands after prolonged torrential rain in March swept away tons of soil in a huge landslide on the steep northern face of the reserve.

Chairman of the Norah Head Lighthouse Reserve Management Board, Neil Rose, said the landslide isn’t near any built structures and is at an inaccessible part of the beach, so there was no danger to the public.

“It was quite a large landslide and took a lot of soil with it but there’s no danger of it letting loose and sliding anymore, but certainly the soil is still saturated on that northern slope and it has slumped in a number of places,” he said.

“This particular land slip is about 6m wide and about 20m long right down to the beach and we lost probably a couple of metres of land at the top of the cliff.

“There was a very big Banksia tree on the edge of the land slip that was hanging over at quite an angle and all the soil had washed away from the roots.

“It was dangerous and volunteers working below it trying to replant had to stop work until the tree could be removed.

“We’ve spoken to Crown Lands, and they’re generally in agreement, that what we need to do is get some tree planting done along the top to stabilise that steep edge.

“The top of that slip is almost vertical for the first three metres of it so trying to get something on that face of it will be particularly difficult, but what we’ll do is plant something like banksias back from the edge and get their roots into the soil.”

Rose said apart from planting at the top and deep rooted vegetation starting down near the beach, the most sensible approach was to let nature take its course to revegetate the slip area and bind it all together.

“There’s still a lot of water coming through that bank so when it all settles down we’ll start to plant it out,” he said.

Meanwhile, in another part of Norah Head, the Marine Rescue building in Cabbage Tree Bay is still closed following another smaller landslide over the weekend, April 10 and 11, at the same site where 4m was eroded and slipped during the severe weather event in March.

A spokesperson for Marine Rescue NSW said the radio room did re-open following clearance from a geo-technical engineer, but it closed again after last weekend’s slip as a precautionary measure.

It is not known when the radio room will re-open.

The Norah Head unit’s normal rescue vessel operations are currently being staged from its boat shed close by on the waterfront and neighbouring Marine Rescue Lake Macquarie is monitoring marine radio calls to the Norah Head unit.