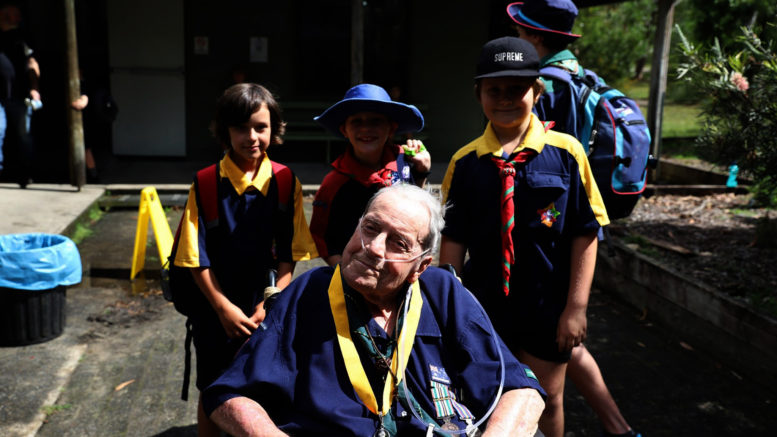 Bob was the honorary guest of the parade at Kariong Scout camp.

Peninsula Villages resident Robert ‘Bob’ Seal was recognised for his dedication to community service at a local district Founders’ Day celebration on February 21.

Seal was escorted by youth members and was the honorary guest of the Kariong Scouts parade, after having a huge scouting past as District Commissioner for many years.

Seal said to be recognised at the event was a ‘very special moment in his life’.

“I felt very happy, honoured and proud that everyone thought so much of me to have me at the Founders Day celebrations,” Seal said.

“My time with the Scouts has spanned over many years and it is those years that I will cherish for the rest of my life.”

After joining the Cubs in 1939 at the age of six, Seal has continued to be a member of the Scout movement, taking on a variety of roles over the 80-year period.

From Cub and Scout leader, to camp warden, Scout band master and District Commissioner, Seal has broadened his reach within the program and is now known as an honorary commissioner.

He also launched and directed the Cumberland Gang show in 1970, a show which hosts performances for NSW audiences to this day.

Seal said his fondest memories of his time with the Scouts include teaching children life skills and watching them develop and launching inexpensive projects including reproducing Umina Scout Hall.