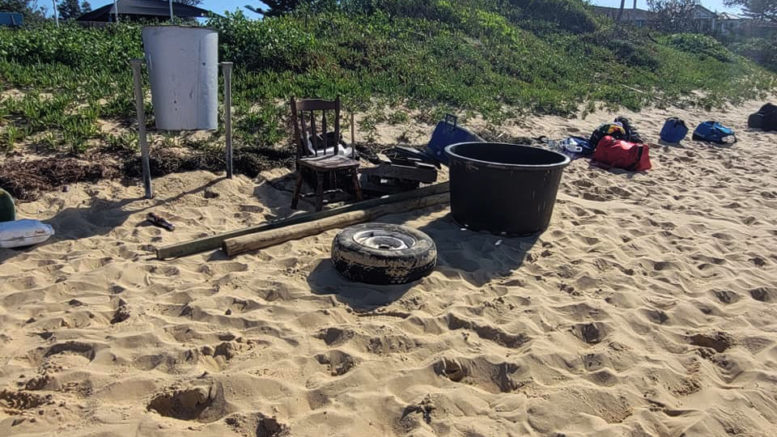 Tyres, chairs, bags and litter was found to have washed up between Umina and Ettalong Beach

Beaches at Umina, Killcare and Pearl Beach will remain closed due to water quality concerns following the deluge of flooding experienced by the Coast over the last several weeks.

The closure was put in place before the Easter Long Weekend due to concerns of storm water pollution in many of the swimming sites.

As of April 6, swimmers were advised to avoid these areas that contained discoloured water and floating debris.

A Council spokesperson said Killcare and Umina beaches will remain closed until at least late this week.

The news comes after weeks of strange objects were found to have washed ashore, including armchairs, tyres, planks of wood, bags, and even animals.

A swamp wallaby was rescued in Hardys Bay by Paula and Beth from Wildlife ARC after it was found to be in a distressed condition.

The duo wrapped the 11-kilo marsupial in a towel before taking it to the Animal Referral Hospital in Gosford where it was treated for shock, warmed up and checked for injuries before being given a clean bill of health.

Local, Treveen Brown, said she had initially saw the wallaby when a photo was posted to a local Facebook page.

“Wally was out on the mudflats and the tide was coming in [so] we didn’t know if he was injured or stuck in the mud or just having a rest but the ducks and birds were getting a bit agro,” Brown said.

“After searching for some time, he was finally located hiding in the mangroves – what a clever Wally.

“I must admit, I never thought I’d see a wallaby bounding across the bay!”

A bloated cow was also found to have washed up on Umina Beach but was sadly unable to be saved.

Wildlife ARC are also asking locals to call 02 4325 0666 if they spot any vulnerable or injured animals washed up from the floods.

Surf life savers will continue to assess the safety conditions of each swimming site, with online updates on the closures available at www.environment.nsw.gov.au/beachapp/CentralcoastBulletin