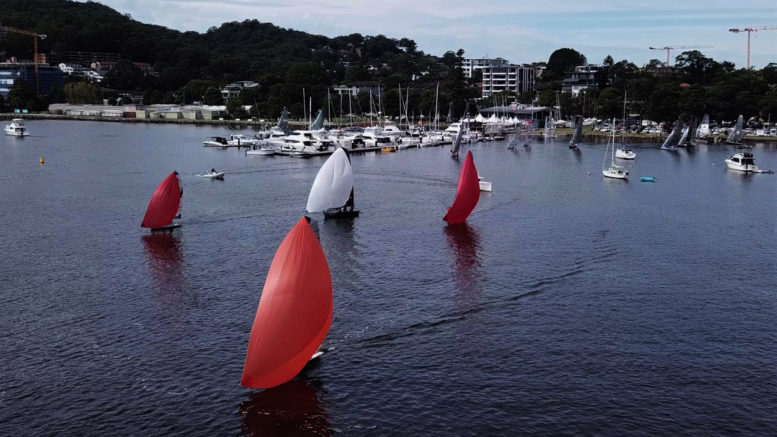 Over four days, from Friday to Monday, April 2-5, a fleet of 39 16ft and 17 13ft skiffs undertook multiple races for an accumulative score to determine the 2021 Scratch and Handicapped title winners, along with a number of other smaller scale awards.

Despite light wind conditions that were unfavourable to many of the sailors and caused Friday’s races to be postponed entirely, all eight races went ahead within Brisbane Water, often starting from a point close to Tascott with turning marks positioned toward Saratoga, Green Point or Point Frederick.

For Gosford Sailing Club, four 16 ft and three 13 ft skiffs were enrolled in these races against fierce opposition from clubs located around NSW and Qld, with the event’s heavy favourites for the Scratch races being Manly and Belmont 16s Sailing Clubs.

There was even a family feud to be settled with the 16ft skiff, Aristocrat, sailed by skipper, Ashley Robson, Sheet Hand David Graham and Forward Hand Brent Connor up against the Civil projects skippered by Grant Robson along with Sheet Hand Blake Robson and Forward Hand Mitch Rolfe.

In the 13ft races from Gosford came Kye Rivers and Mark Murray on the skiff, Homes Marine, Nathan Gulliksen and Hayden Hansen on the skiff, Sydney Swans, and Logan and Will Rivers on Gosford’s third 13ft skiff.

Over the weekend, the biggest achievement for Gosford came on Sunday when Sophie Macintosh aboard Brian Hilton won the handicap race.

Separately, Ashley Robson aboard Aristocrat reached her highest result when her team was placed third in a handicap race on Monday.

For River and Murray on Homes Marine, one win came as well as three third places throughout the weekend in part due to benefitting from the light wind conditions.

In the end, the 2021 Australian champion for the 16ft skiffs was the skiff, River Wild, captained by Warwick Rooklyn, from Belmont Club.

Nonetheless, Gosford Club Commodore, David Neate, noted his pride in all his sailors who represented the club against a difficult line up of contestants.

“We don’t have the budget and experience of the biggest clubs, so we are all extremely proud of them,” he said.

“Most of all, we are proud of the Rivers kids, Sophie Macintosh and Ashley Robson because they have come through the club’s own training program from juniors up to skippers which shows off the home-grown talent we have.

“Now that we have hosted the Australian Championships again after many years, we know we are well and truly ready to host again in the future.

“The facilities that we have built up over the years are now ready to host events like this, helped by the culture we have with members volunteering and making visitors feel welcome.

“We’ve had many comments on the friendliness of our club.

With the season of sailing now wrapping up, Gosford Sailing Club will now look to prepare a suite of events for next season.