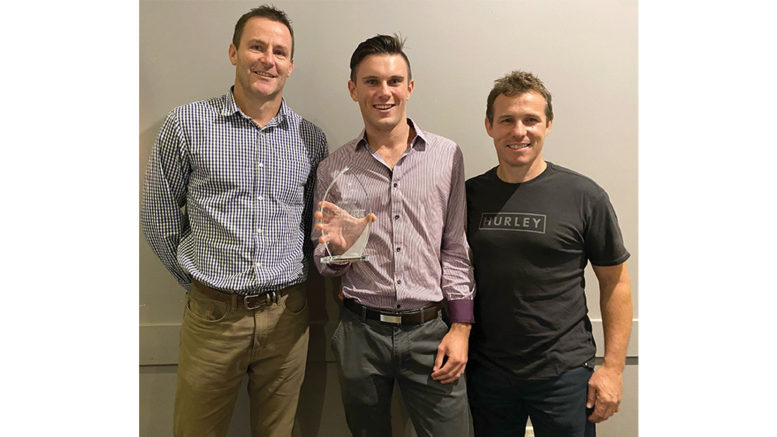 Woy Woy local, Mason Colwell, has won the Young Coach/Official of the Year Award with Sport Central Coast for his efforts over the past 12 months with the Peninsula Touch Association.

The young referee received the award at the annual Central Coast Sports Awards night at Gosford RSL on March 25.

Fulfilling the role of Director of Referee’s with the Association at only 20 years of age, Colwell is responsible for appointing referees for each match, ensuring numbers for each game and representing the Peninsula at regional and state tournaments.

To maximise his ability in this role, Colwell recently earned his Level Six referee badge in touch football, the highest level badge available, allowing him to now officiate at the regional, state, national and international levels.

Over the past 12 months, Colwell has also represented his regional team, the Hunter Western Hornets, as a referee and been selected in the NSW emerging referee squad.

Most recently, he has been selected in an officiating position for the NSW State of Origin Touch Football squad to play against Queensland in Coffs Harbour from June 18-19.

Despite the strong forward strides Colwell has made in his field, winning this award with Sport Central Coast came as a surprise.

“It was an honour to be named the recipient of the award for this year,” he said.

“I wasn’t expecting it and it was a surprise to even get nominated, so you can imagine how it felt when I was then named the winner.

“No one competes in sports as an official for big prizes and awards, so it’s great to see that someone (or some few) in the community is noticing what I am doing, believing in my abilities and supporting my development.

“I love it when you read the exact play a team is going to run, get to the right position in time and seeing the ball getting put down for the try – there’s no better feeling or view in the game.

“My playing background has always assisted me to understand the game better and read the play, [you have] to be composed and in control of the game – without those two things there’s no point being there.”

Mason said his experience of transitioning from player to referee was one that involved mixed emotions.

“When you receive your level four badge in touch you aren’t allowed to play anymore … the next day I was in tears and considering handing back my badge because I wouldn’t be able to play at a representative level,” Mason added.

“I let some time go by and had a few conversations, obviously I ended up sticking with it.”

“The bank account definitely is in support of that decision now.”

Looking forward, Colwell is preparing for the commencement of the Winter Season with Peninsula Touch, for which registration is currently open.

“Our club has over 1,000 members from juniors up to seniors and all community members are welcome to come and participate,” concluded Colwell.

Registration details for the 1st, 2nd, 3rd, Women’s and Mixed teams can be sought on the Association’s website, with the season set to commence on May 5.