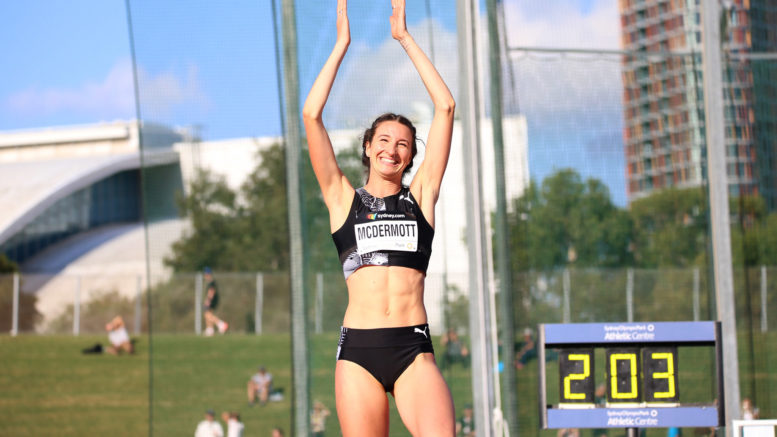 In setting this new height, ahead of the previous 1.99m record set by her Victorian rival and friend, Eleanor Patterson, McDermott will now head to the 2021 Tokyo Olympics after undergoing much of her development in the sport at Gosford and Mingara athletics clubs.

Having cleared all her jumps from 1.86m – 1.97m in one attempt, she found herself the lone competitor facing the 2.00m bar.

After missing out on her first attempt, McDermott came back for the second and found the result she has been looking for all season.

The jump has topped her previous personal best of 1.98m, earned last year.

“To be able to jump (2.00m) today with my friends and family and an incredible crowd is just without words, it hasn’t sunk in it,” McDermott said.

“When I was on my second attempt, I just had a big smile on my face because I knew it was sealed.”

The Central Coast originating jumper has taken the opportunity to thank her jumps coach, Matt Hornsell, who has trained McDermott since she was competing in the U11’s at Gosford Little Athletics Club.

“We’ve been training together for fourteen years and he said as soon as I started that I was going to be the one to jump two metres.

“I held onto that as a promise.”

McDermott went on to attempt a 2.03m jump, and although she missed out, it is a telling sign of her commitment to always reaching higher.

Over the fourteen years of coaching she has had with Hornsell, McDermott has moved from little athletics with Gosford to Mingara Athletics Club at U16’s, where she still trains to this day, and then on to competing for Sydney University as part of a scholarship.

Hornsell has tracked her progress throughout this time which he noted to have developed with steadily increasing momentum over the years.

“It was funny, when I first met her, she ticked all the boxes I have in looking for athletes with the features, movement and body shape to be a high class high jumper,” Hornsell said.

“I told her, ‘if you stick with this you could one day be the best high jumper in Australia, as you get older you’ll physically tick all the boxes to do that.’

“She took that on board actually and has said she always remembers that conversation.

“Back then she was just a kid, she wasn’t that strong, but she enjoyed herself and her friends and the sport.

“As she progressed she did more work, got stronger, and now she is one of the strongest high jump athletes in the world.

“Her progression has been great to see.

“Some athletes like to only be number one in Australia, so when you put them in a field with ten other athletes who are better than them they can’t cope with that.

“Nicola tended to thrive on those conditions, on competing overseas, and just loved the atmosphere.

“That’s where she felt she belonged I think.”

Now, both McDermott and Patterson have qualified for the Olympics that are scheduled to take place throughout July and August this year.

Here, they will have the opportunity to compete for the highest accolade on the world stage.