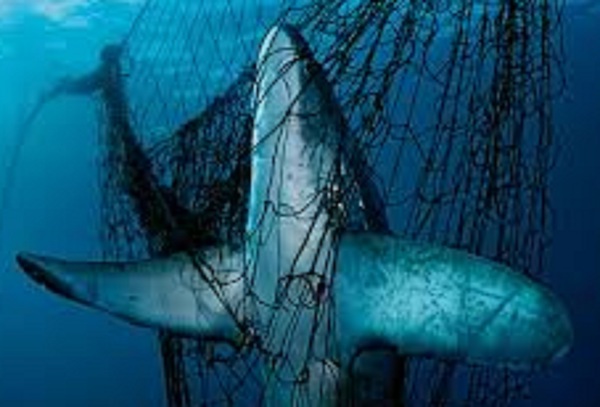 Image of a shark entangled in a shark net. Archive 2017

The Animal Justice Party and the Central Coast Dolphin Project are once again calling for a ban on shark nets in the region, with recent data showing 418 animals have died in Central Coast shark nets over the past nine years.

“They have no place on the beaches here on the Central Coast or anywhere across NSW.

“Research has made it abundantly clear that shark nets do not effectively improve human safety in the water, instead they simply kill marine animals.

“Over half the animals, including dolphins, whales and turtles unfortunate enough to become entangled in these deadly nets, will suffer a slow and painful death by drowning.

“These figures are shocking but they likely don’t even cover the true death toll.

Animals found and released from shark nets are not guaranteed survival because the stress and injury of entanglement often leads to their death soon after.

“With drones, helicopters and listening stations, there are so many other options available to our community to swim safely without hundreds of animals needing to die each and every year,” Ryan said.

“Because of community action to protect animals, shark nets have already been removed along the north coast of NSW; it’s time for the same to happen here on the Central Coast.”

“These ‘Walls of Death’ are indiscriminate killers in our oceans, that provide many unwary beach users with a false sense of security.

“Shark nets are designed to run parallel to the beach, for a small section of beach.

“These nets are also anchored well out, which can allow animals to move in and around them.”

Ling said nets would be removed from NSW beaches on May 1 for the winter months but were due to be replaced on September 1.

“This coincides with the southern whale migration, when mother whales are heading down the coast, close to shore, with their new calves,” he said.

“Nothing is more distressing than witnessing a whale calf caught in a shark net, while its protective mother is stressing on the other side.

“This is an extremely dangerous situation for both the animals and the rescuers.

“This has happened a few times over the last 10 years on the Central Coast.

“Shark nets cannot determine if an animal is a ‘friend or foe’, endangered species, or young or old; they can kill them all.

According to Ling, there are 12 beaches that have shark nets on the Central Coast, from Catherine Hill Bay to Umina.

“Hopefully, one day, politicians will learn the truth about shark nets, and oppose them for the sake of our marine environment and its inhabitants, instead of jumping on the scare mongering band wagon just to get easy votes.”