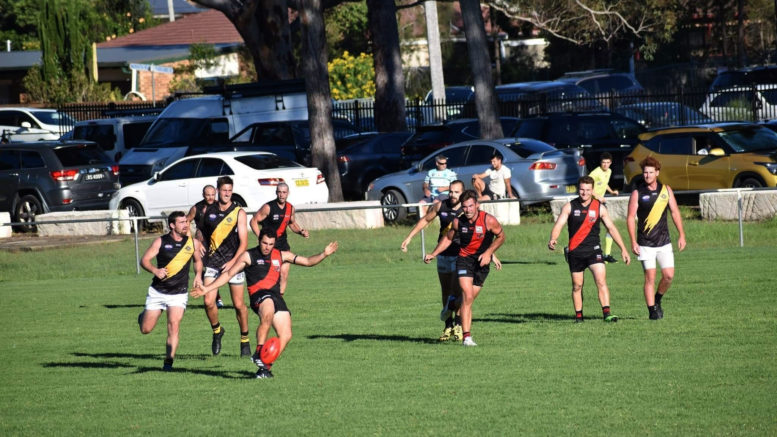 The Killarney Vale Bombers have got their 2021 Black Diamond campaign off to a strong start with a 103 – 63 win over the Gosford Tigers on Saturday, April 10.

At Adelaide Street Oval, it was the Tigers who got on to the score board first and continued to challenge for the win in the first quarter, going in to the second quarter a point ahead at 19-20.

From here, the play steadily turned in favour of the Bombers after putting five goals on the board in a row.

In the third quarter, the Bombers took further control of the game and found a comfortable lead at 92-42.

The final quarter was another arm wrestle, with the hosts suffering a few minor injuries as well as a broken foot, wherein Gosford showed their character by fighting to the end despite the win being out of reach.

For Bombers’ first grade Coach, Corey Shackleton, the win was a great way to start a campaign where his team played a class of ‘footy’ they will hope to maintain all season long.

“Gosford have a young side and some good experienced players as well, so we knew they would be enthusiastic in this game,” he said.

“We had three players making their first grade debut for the club, one of them being Aaron Duncan, who ended up being a stand out performer for us.

“It was his first game for the club straight into first grade, a scholarship player for the Adelaide Crows when he was younger, playing his ‘footy’ in Sydney.

“Our centreman, Damien Hector, is a hardnosed experienced player and was a cool head early in the game when there was a lot of pressure on us.

“Our forward, Brandon Lloyd, had a solid game up front, kicking five goals, and our captain, Brad Edwards, was good, playing in the back line as a classy ball user, making the difference a few times with some really clean entries into our forward fifty.

“Our centre half back, Enjay Convy, was solid, as was Rhys Dawe in the back.

“The performance of these two were reflective of the way we want to play this season.

“We want our backline players to be running, carrying the ball, breaking lines and opening the game up for us.”

Shackleton also commented on the season ahead with a word for the suite of title contender match-ups his team will face after this weekend’s bye.

“We know Newcastle City and Terrigal Avoca, the grand finalists from last year, are the two teams to beat this year.

“Cardiff will be strong and Singleton as well.

“From our end, where we lost to Terrigal Avoca in a Preliminary Final last year, we now want to go one better.

“We’ve got a really tough few weeks coming up after our bye, where we play Cardiff, Singleton, Terrigal Avoca and Newcastle City in a row in a big bunch of away games, and this five game stretch will really determine where we finish.

“Nonetheless, I see us finishing in the top four and hopefully then we can avoid Terrigal Avoca until the Grand Final.”

In the Women’s Diamond Cup Round One, the Bombers had a bye, giving them another week to prepare for a title race that they hope to win in making up for falling short last season.

“Our women’s team went through the whole season last year undefeated before losing to Newcastle City in the Grand Final,” continued Shackleton.

“After being strong favourites going into the match, I guess you could say it was a case of choking at the last minute.

“That’s a blunt way of putting it but I suspect that is how they feel.

“Yet with that in mind, they are now very driven, with their new Coach, Michael Smith, in the reins, which sparks a bit of newfound energy, and there’s a lot of desire there to make up for what they felt they threw away last year.

“I think they have a real good chance, aiming to finish in first or second and won’t settle for anything less than winning the Final.”

With the 2021 season now fully swinging, and the interruptions of last year now hopefully in the past, Killarney Vale will have only the strength of their team sheets to rely on in making good on their title contentions.