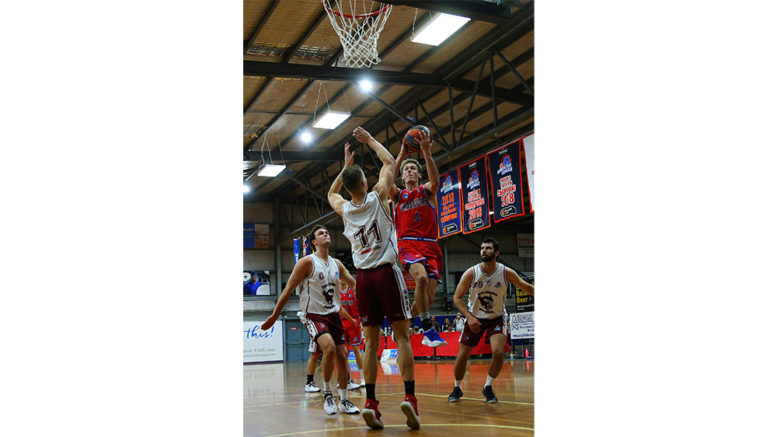 The Central Coast Crusaders play Manly Sea Eagles in Round 1 of the Mens Division 1 Waratah League at Breakers Stadium on 10th of April, 2021 in Terrigal, NSW Australia. (Photo by Paul Barkley/LookPro)

The 2021 Waratah leagues launched for the Central Coast Crusaders over Saturday and Sunday, April 10-11, at Breakers’ Indoor Sports Stadium, with a difficult row of games for the youth and opens men and women teams.

The strongest start of the season came for the Youth Women’s team, who played first against the Manly Warringah Sea Eagles and came away with a slender win of 58-52.

Conceding the first score to a Sea Eagles three pointer, the Crusaders came back strong to lead at the first quarter break 20 – 12.

By the end of the second quarter, the Crusaders had slightly stretched out their lead to 13 points, with the defensive efforts of both teams reducing their opposition’s shot percentage and keeping the game’s ebb and flow in mostly equal measure.

The Crusaders were unable to pull away from their opposition in the second half, with the margin between them slowly being reduced.

With two minutes to go, the Sea Eagles looked to three pointers to overcome their six point deficit, but the defence of the hosts held firm.

With a positive start coming for the Youth Women, it was unfortunate for the following games to all end in losses for the Crusaders.

The Men’s team were up next, also against the Sea Eagles, and the contest was tight from start to finish.

With the scores levelled at 17 – 17 at first quarter time, both team’s scoreboards continued to rise almost in unison, reaching 25 – 25 late in the second quarter.

At the start of the second half, the Sea Eagles had a slender lead, one which they were able to maintain until game’s end.

At points in the contest, the Sea Eagles were close to pulling away from their hosts, but the strong efforts of the Crusaders brought them back into the contest.

Despite this, the team could not overcome their visitors on the scoreboard, with it reading 66 – 73 at the end of the match.

For the Women’s team, a dominant start from the Sea Eagles was unassailable, despite making a strong effort to minimise the deficit throughout the second half of the match.

More disappointment was faced by the Youth Men’s team, who came to Breakers on Sunday after a Saturday loss to the Illawarra Hawks, only to lose again against the Bankstown Bruins.

A new bout of energy came to the Bruins who pushed ahead early in the third quarter, although the Crusaders made efforts to reduce it at various points.

The time to clear out cobwebs is the very first round of the season, yet the Crusaders teams to have lost will feel the pressure now to do so quickly and get back into winning ways.